That’s until a call from an eccentric local to a popular late-night talk radio show changed everything. A bizarre tale told about a yawning chasm in the earth in the wilderness of Central Washington State was told. The legend of Mel’s Hole in Ellensburg, Washington was born. 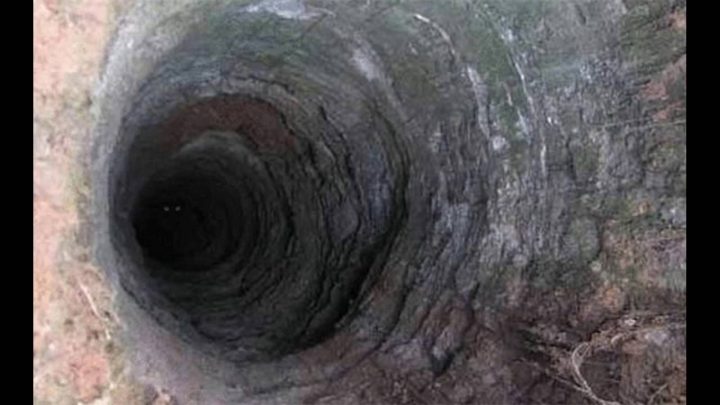 The origin story of Mel’s Hole

The story behind Mel’s Hole began one night during an episode of Coast to Coast AM.

It’s a late night nationwide radio show. It deals with the paranormal, conspiracy theories, and so forth.

On February 21st, 1997, a man calling himself Mel Waters phoned up host Art Bell. He claimed to have found a pit with no verifiable bottom on land he used to own near Ellensburg, Washington. Washington is in the Pacific Northwest of the USA. He attempted to measure Mel’s Hole depth using fishing line and a weight. In doing so, he determined Mel’s Hole to be greater than 15 miles deep.

He also stated it had the ability to bring animals back from the dead. This is where things got a little strange. He had heard a story from another man who threw his dead dog in the pit. Only to find it walking around alive just a few days later.  Shortly afterward, he said federal agents appeared and were hostile. They claimed his land was the site of a downed air force plane, forcing him to surrender his property.

It was in exchange for a leasing arrangement, which paid him a fixed amount of money each month. Using these funds, he then moved to Australia. It’s from there he phoned into the show for the first time. Of course, our friends on Reddit have a few opinions on the matter.

The tale of Mel’s Hole unravels

The legend of Mel’s Hole Washington continued to build over the years. The syndication of the Coast to Coast AM recording ensured the growth of this urban legend.  What’s more, Mel Waters continued to phone into the show, most notably in 2000 and 2002. At these times, he reiterated the story he originally told while adding new details.

However, he refused to confirm the exact location of Mel’s Hole. This, despite the establishment of search parties by local paranormal enthusiasts. These tales eventually captured the attention of local media. Of course the media did some investigative reporting of their own. Their research, more or less, debunked the entire theory of Mel’s Hole. There was no evidence that anyone named Mel Waters had lived or owned property in the area. That or proof that his wife, purportedly a professor at Central Washington University, worked there.

Department of Natural Resources geologist Jack Powell then put the final nail in the coffin. Using basic knowledge of how dirt and rocks behave, he concluded that a chasm matching the description of Mel’s Hole could never exist. Reason being the heat and pressure that far down would cause the walls of the pit to collapse. To give a sense of scale, the deepest naturally occurring cavern on Earth plunges 7,188 feet. The deepest mine in the world went down to a depth of 12,672 feet.

Taking things further, the Russians drilled the deepest hole in history from 1970 to the early 1990s. Hitting an absurd depth of 40,000 feet below ground! They encountered insane conditions which slowed drilling to crawl. These included rocks which behaved more like plastics rather than the solid rocks. That and temperatures pushing 180 degrees Celsius. Extrapolating out from these data points, it’s clear Mel’s Hole can’t exist.

Below is a video of Mel’s hole.

As if reason couldn’t bury this Snopes worthy story, there’s more.  Mel Waters in his later calls with Art Bell in 2002 cast further doubt on whether his tales regarding Mel’s Hole. In these calls, he disclosed he had been arrested by police in Tacoma, Washington. Also a black out to wake up in an alley in San Francisco missing all his teeth.

Stories of a dime he found from 1943 which mysteriously dematerialized on contact were bizarre. Most alarmingly, he mentioned that he found another bottomless hole in Nevada. This abyss had even stranger powers than the one purportedly on his land.  This hole set ice on fire for months without it ever melting. When a sheep was lowered into it, it emerged from the chasm with an alien embedded within. He didn’t stop there: he maintained that this alien being was able to communicate via radio waves. It warned humans to back away from nuclear conflict, as it posed an existential threat to our species.

Itseems likely the story of Mel’s Hole Washington is based on a pit which exists in fact.

The story of Mel’s Hole jumps back to the spotlight

The craziness of Mel Waters and the undressing of the story behind Mel’s Hole Ellensburg Washington is something. Something you’d think would be enough to put the legend of this chasm to bed for good?

In 2008, a local First Nations man going by the name of Red Elk spoke with a great deal about Mel’s Hole.  He mirrored Mel Water’s claims by stating that Mel’s Hole set fire to ice lowered into it. However, he went further than that, stating that a sheep lowered into it wasn’t just cooked alive… Only that it also implanted a seal fetus inside its uterus, as if by magic. He also claimed Mel’s Hole was the site of a secret base maintained by the United States Army.  Where they liaised with alien life forms. Humorously, though, he was unable to locate the very hole of which he spoke of. This was even when he led an expedition of 30 curiosity seekers to the purported site in 2002.

Where is Mel’s Hole anyway? Mel’s Hole is in Ellensburg Washington, but where exactly is it? Jack Powell, having grown up in the Kittitas Valley and been employed by the Department of Natural Resources.  He had a good idea where the Mel’s Hole location was. After all, when you can’t find Mel’s Hole Google Earth, why not ask a geologist?

In the area described by Mel Waters, he knew of an old abandoned mine. Upon examining the area, he found an open pit which fit the description of the hole. It likely had a present depth of 90 feet deep (with an operating depth of over 300 feet when it was being actively mined). Jack could easily see how lesser educated locals could conclude a hole of this nature would be bottomless. After all, a hole of that depth would have no discernible bottom.  Especially if it was deeper than the conservative estimate mentioned previously.