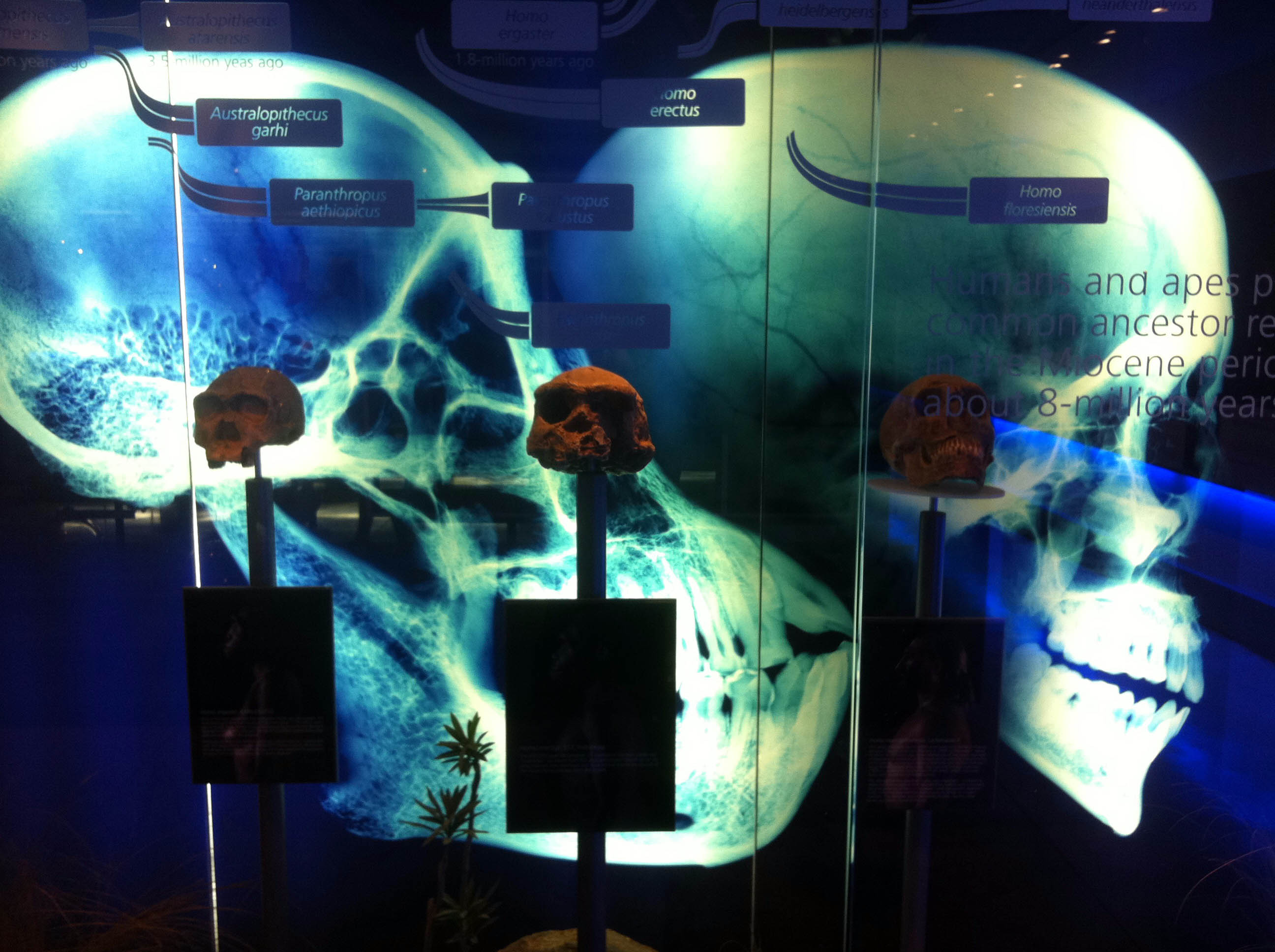 After a delicious breakfast we headed about an hour or 50km outside of downtown Johannesburg towards the Cradle of Humankind. The site became a UNESCO World Heritage Site in 1999 and is famous for housing “Little Foot” which is the oldest remnants of a human life found anywhere on the planet and discovered between 1994-1998. We visited Maropeng Visitor Center in the morning before heading to Carnivore for lunch. Carnivore was off the chain and we’ll get to that later, afterward we headed to Sterkfontein Caves which is the site where “Little Foot” was actually found and now I’m back in downtown Johannesburg blogging like the wind, with you… 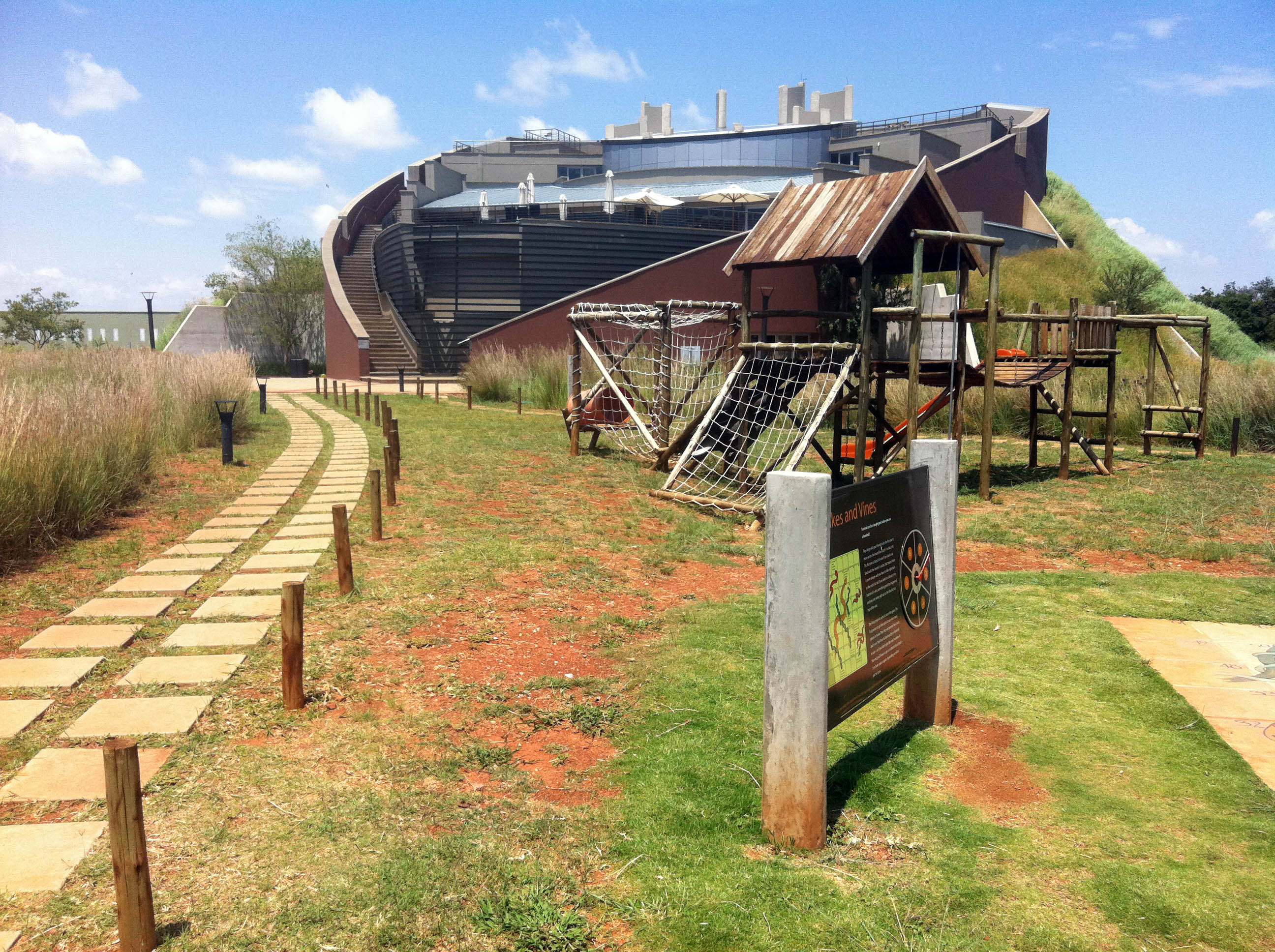 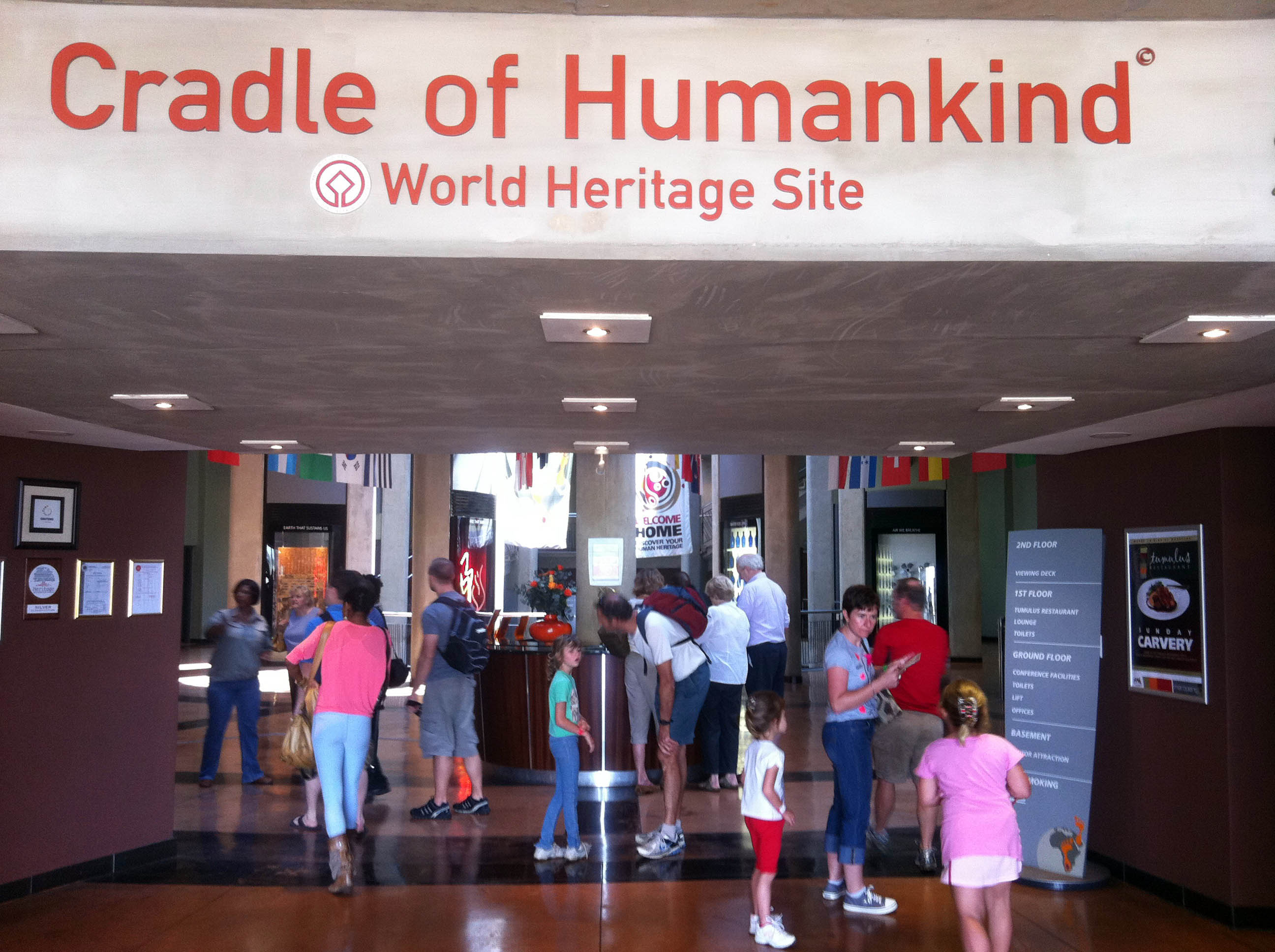 When we first arrived at Maropeng, I wasn’t sure what to expect. As you know, I’m not a research hound and have never spent a dime on a guidebook so today was no different. The moment the tour started it began reminding me of Epcot Center in Orlando, Florida and finally came to the conclusion that it was Epcot Center meets Discovery Channel aka perfect for all ages aka informative and educational.  The building itself is built out of this big grassy knoll of sorts and was like an underground education command center. 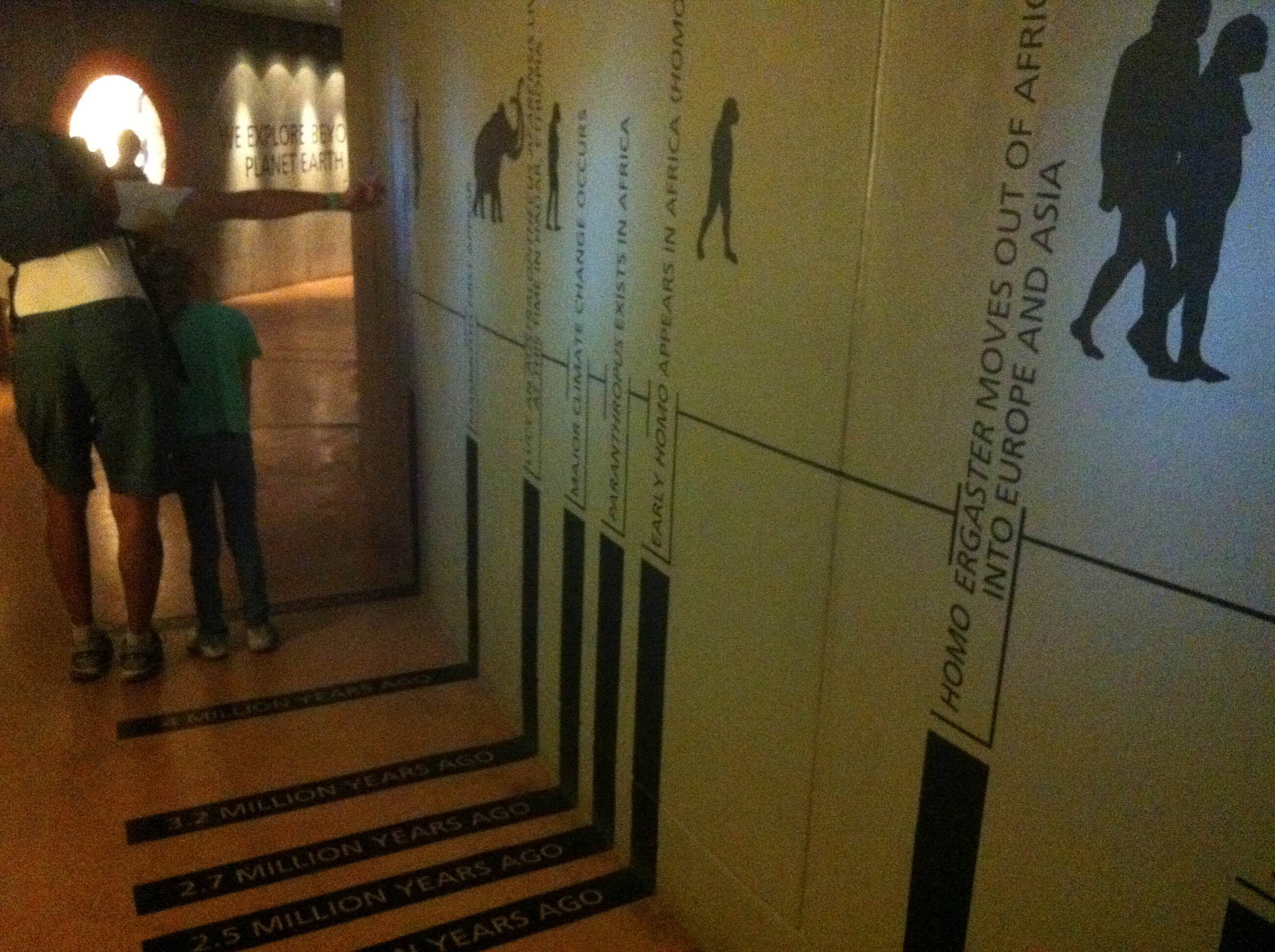 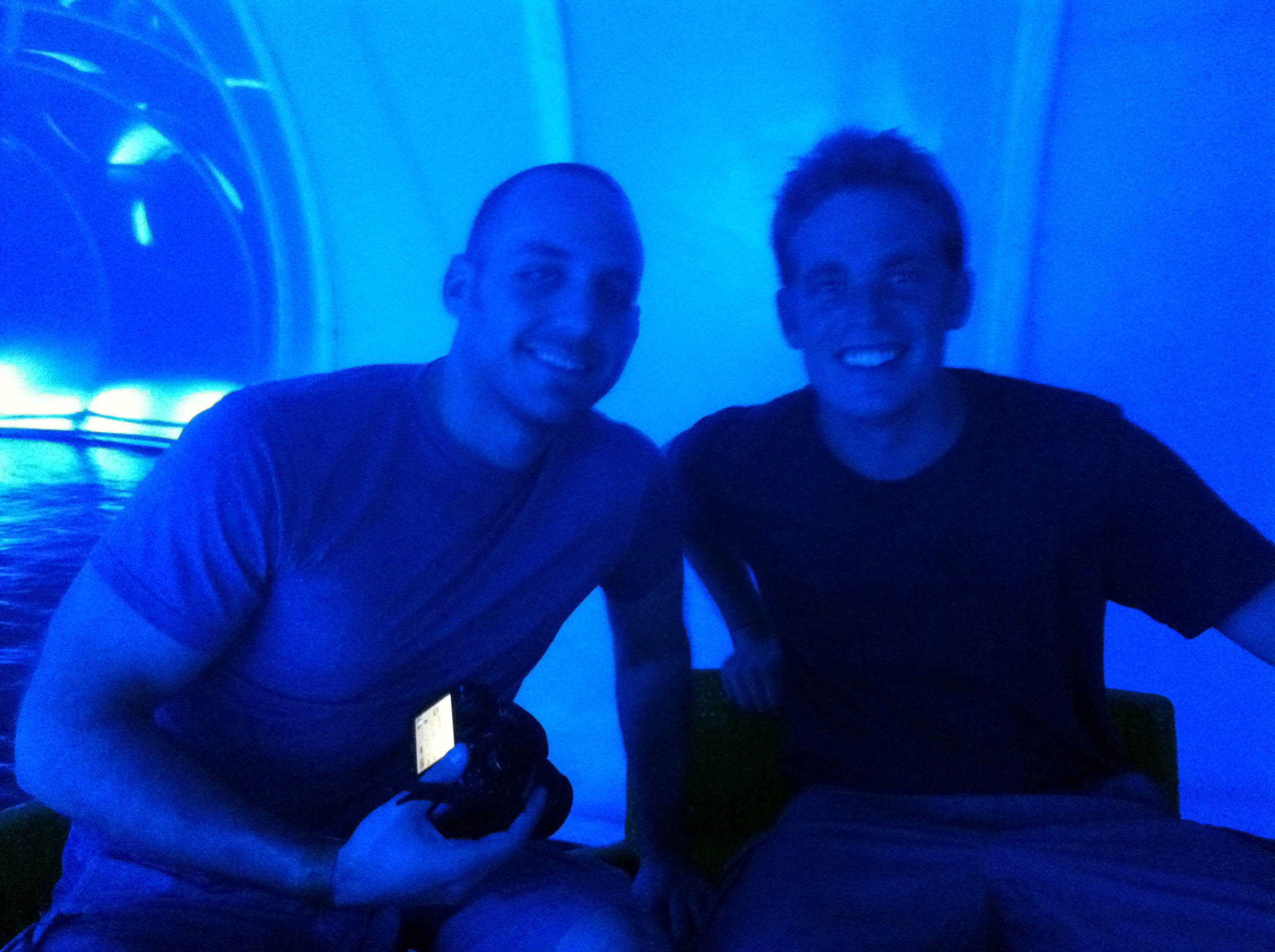 You start the tour going down this long ramp that covers different time periods and what types of life forms were around. Next thing you know you’re on this small boat experiencing the 4 elements of life. Once through you’ll see countless exhibits jam packed with easy to digest facts about humanity. I’ll note that if I was here with a group of guys, I probably wouldn’t come visit this place. If I was here with a girlfriend who is somewhat similar to any other girlfriend I’ve had in the past,  I would come here. If I had a family, I’d 100% come here. I saw these kids on the way in just tweaking over some outside exhibit, told the parents “just wait until they get inside”. 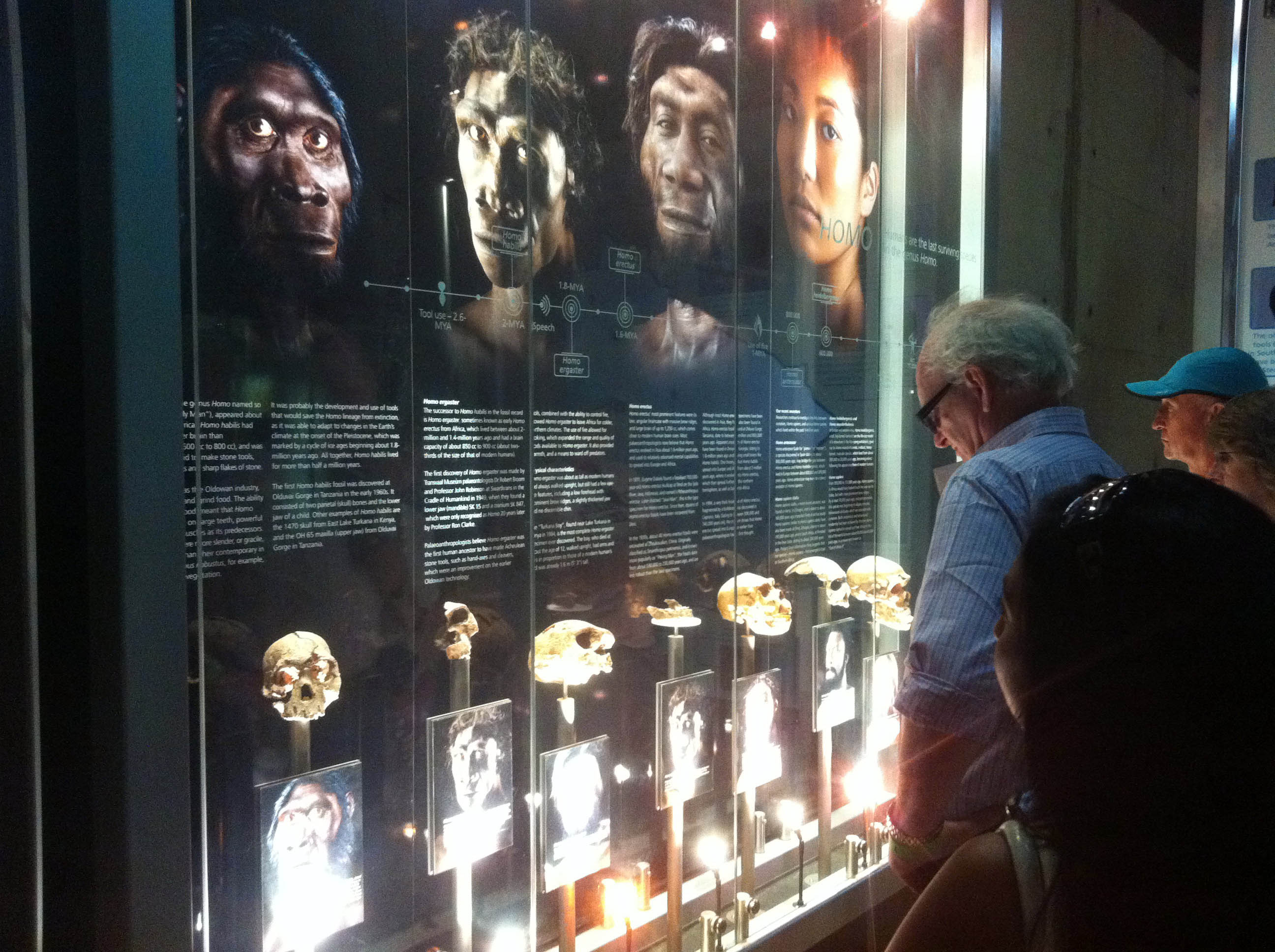 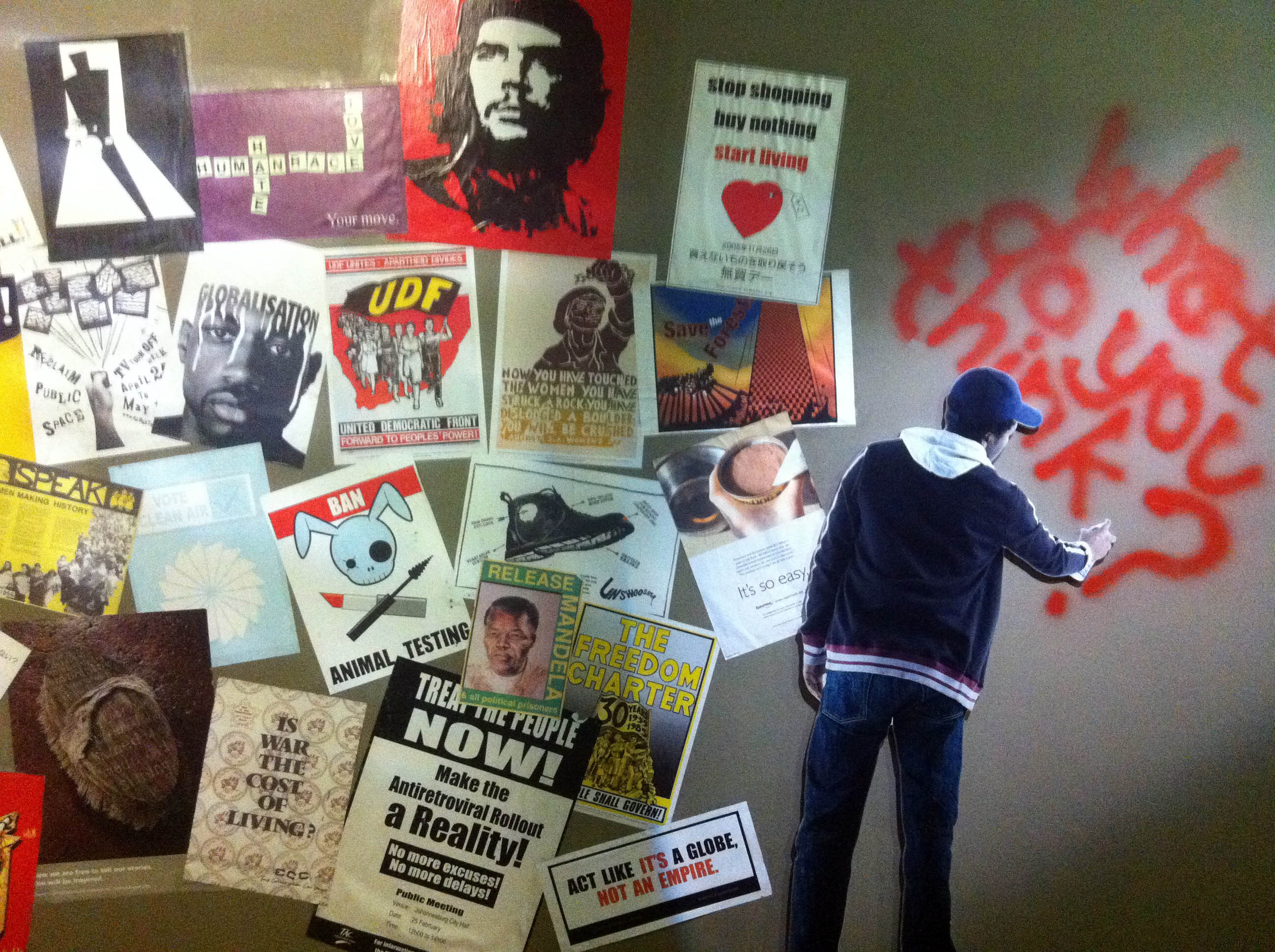 The whole premise of the exhibits was to deliver interesting facts in a fun and easy to understand manner. Personally loved talking on the telephone with some of the extinct animals and just reading up on the evolution of man. It sucks that the Dodo bird is dead but I can’t blame the sailors, I was really getting hungry and while talking to such said animal from the past couldn’t help but think how much meat would be on each one of them. Apart from that, the walls had lots of exhibits that made you think like “will we destroy ourselves?”, “what do you think?” and the reminder that “we need to find ways to fight poverty and sustain the environment”. 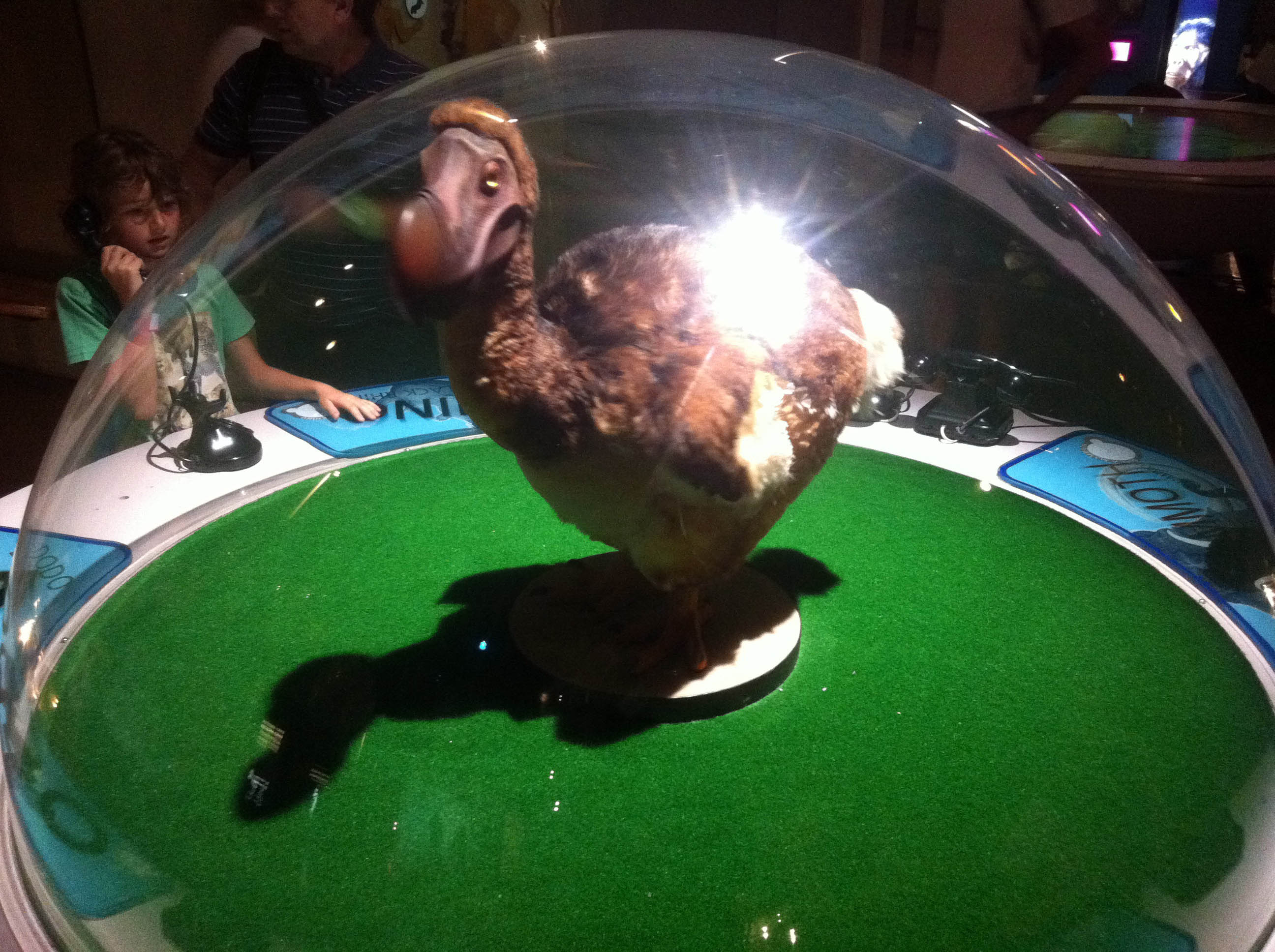 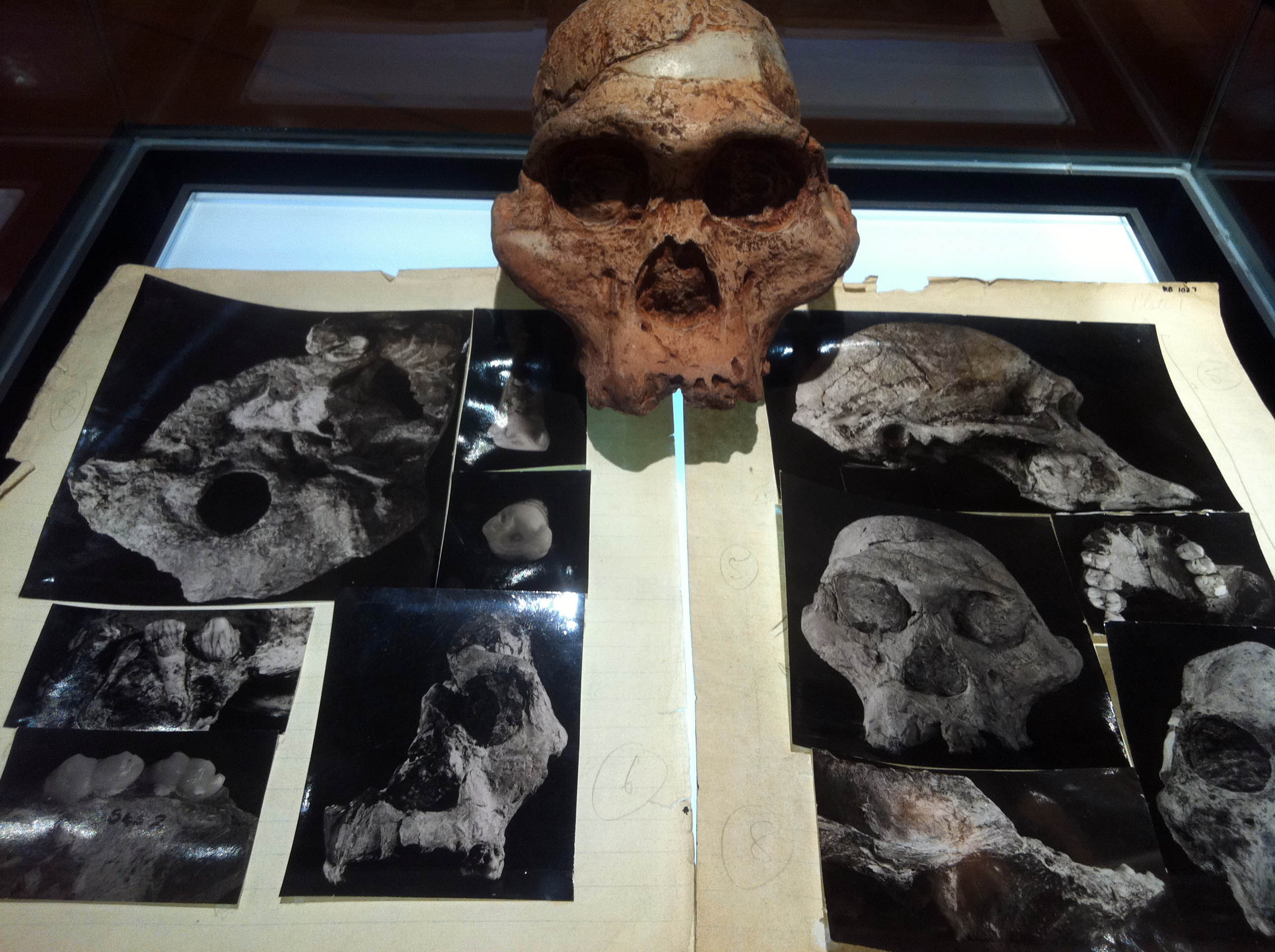 Afterward we headed through some other exhibits and were back outside again. Would you believe that I went through the “kiddie cave” and on the way out some gent asked how it was, then where I was from… Turns out he is from Ottawa and lived in the same neighborhood I grew up on and to make matters crazier, lived 8 blocks from me? It’s a small world my friend. He was there with his kids and they seemed to be having the time of their lives. I told him the cave was “uneventful but worthwhile” if that makes sense. 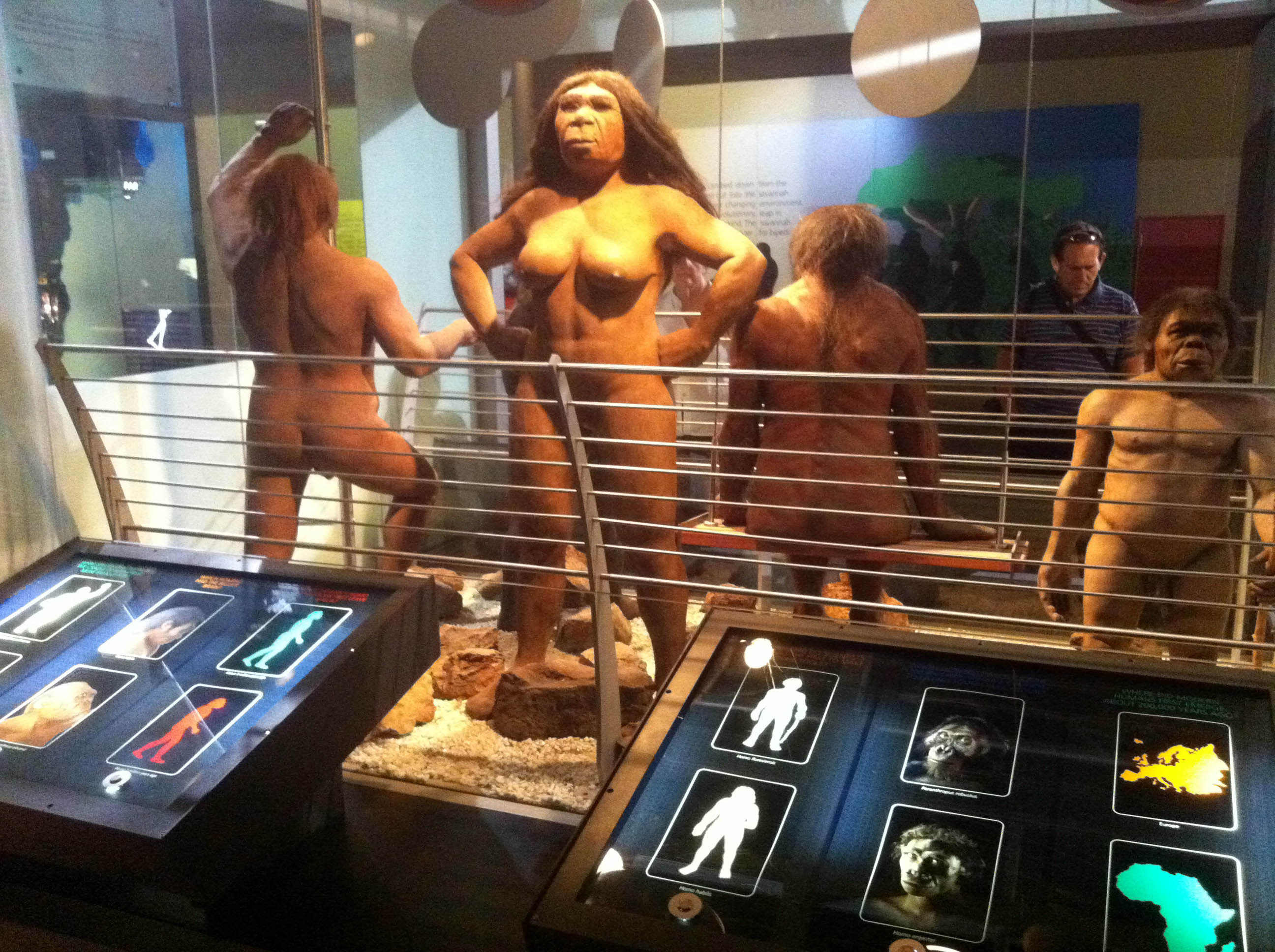 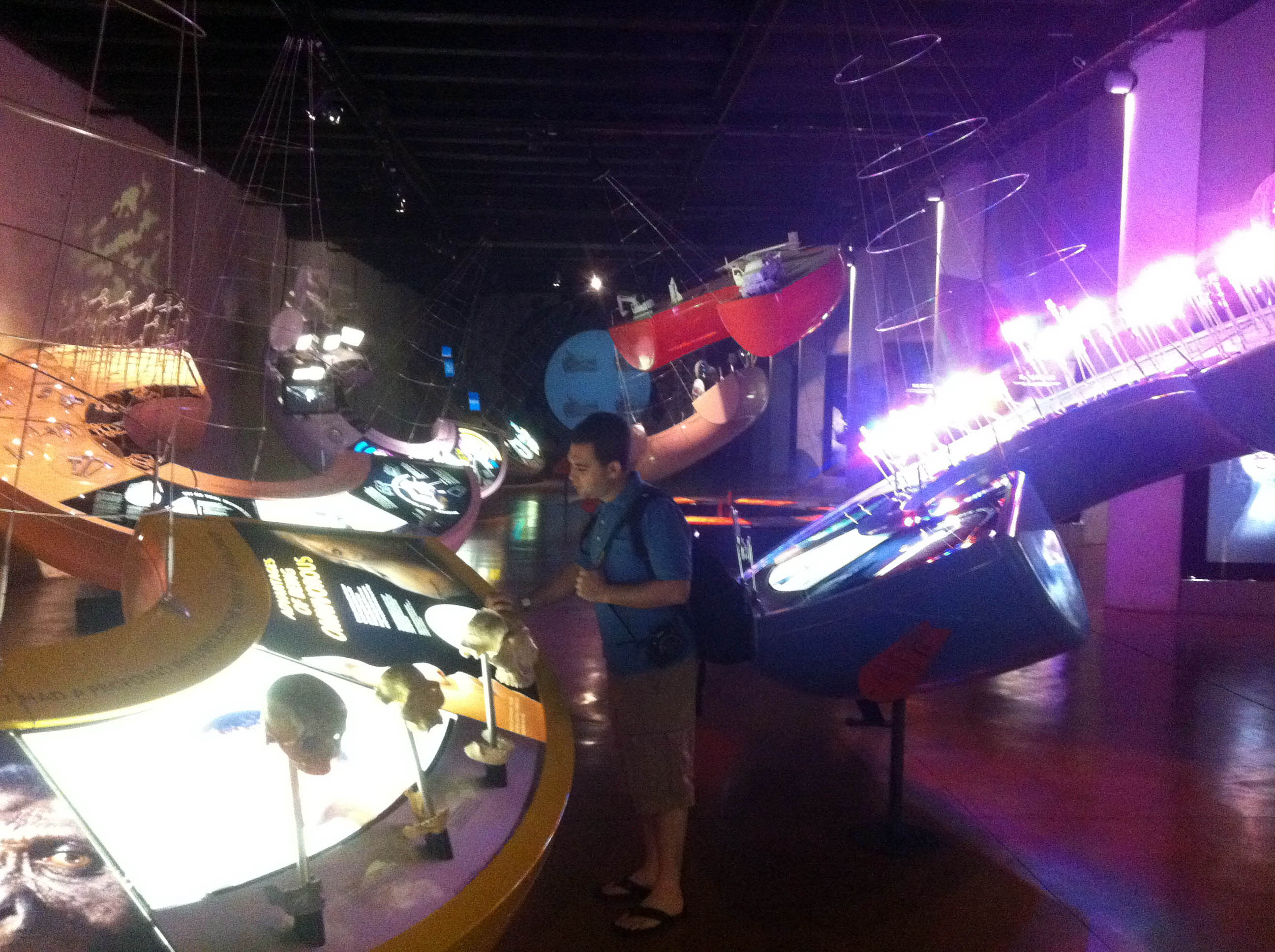 After this we were headed to Carnivore and let me say… Ryan took some photos of me being served that reminded me a 7 year old kid at Christmas. If you like meat and enjoy over the top portions as well as eating crazy things, this is a MUST VISIT. This restaurant INSTANTLY slid into one of my top 5 restaurants in the world. We all feasted on zebra, impala, crocodile, kudu, chicken, pork, beef, lamb and probably a few other animals that I can’t even remember. The whole style was amazing but that is for another paragraph. 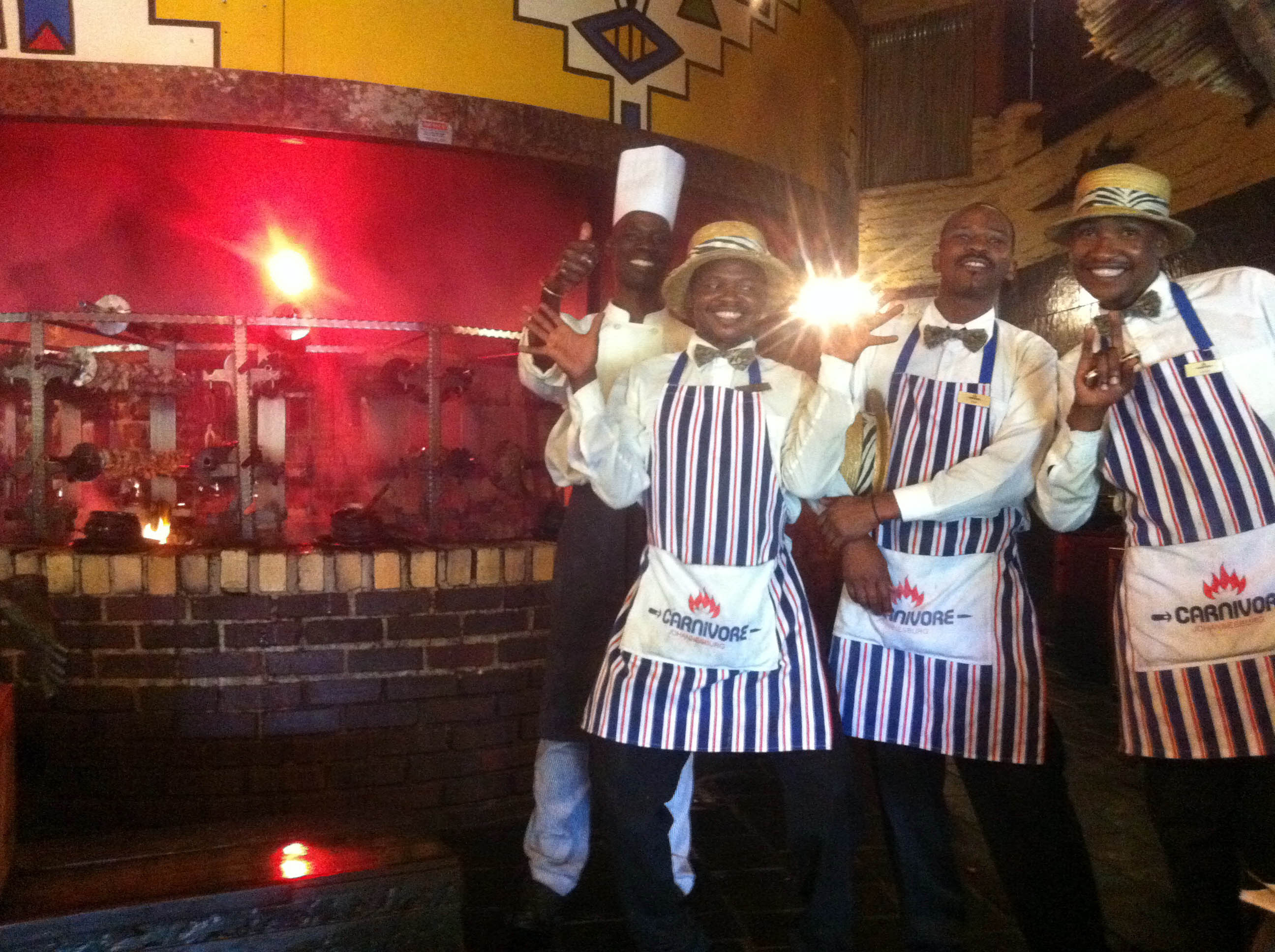 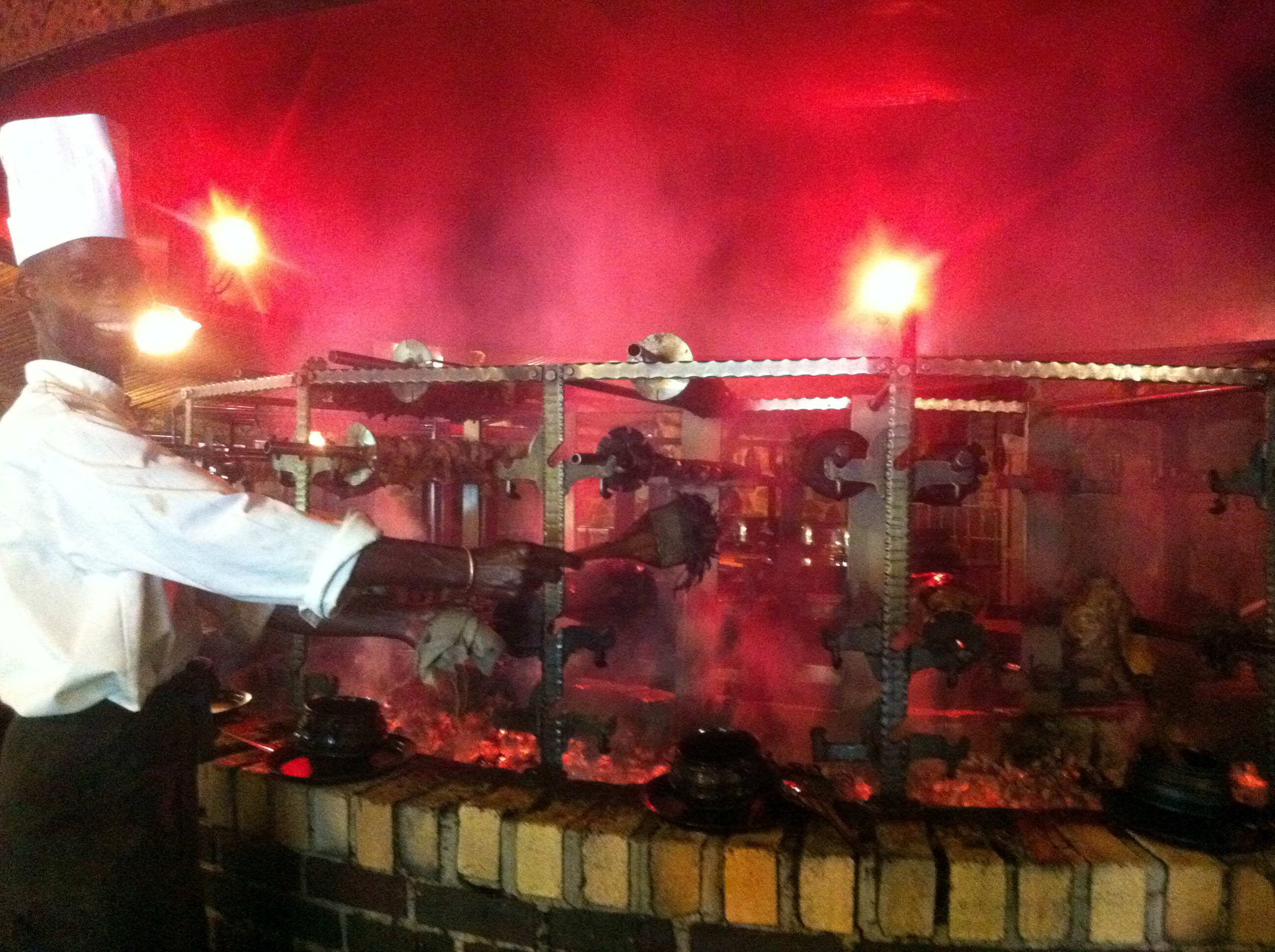 The style was something I had not seen before. They have this MONSTER coal fire where the amount of meat being prepared is absurd. Your table has a salad and dips in the center and you have a flag that is standing tall and proud. Gents in clever outfits with big smiles come around with massive chunks of meat and cut off as much as you want at your table. As long as your flag is up, they keep coming with different meats. Once you are done, you lower your flag in a form of surrender. I seriously overate and I’m not kidding in the slightest. Believe the last time I eat that much was Thanksgiving 2007 where I found myself beltless (sic) and distressed on the floor wondering what to do with myself. Anyways, enough of that  but just know that if you’re in Johannesburg and you like eating interesting things it is HIGHLY recommended. 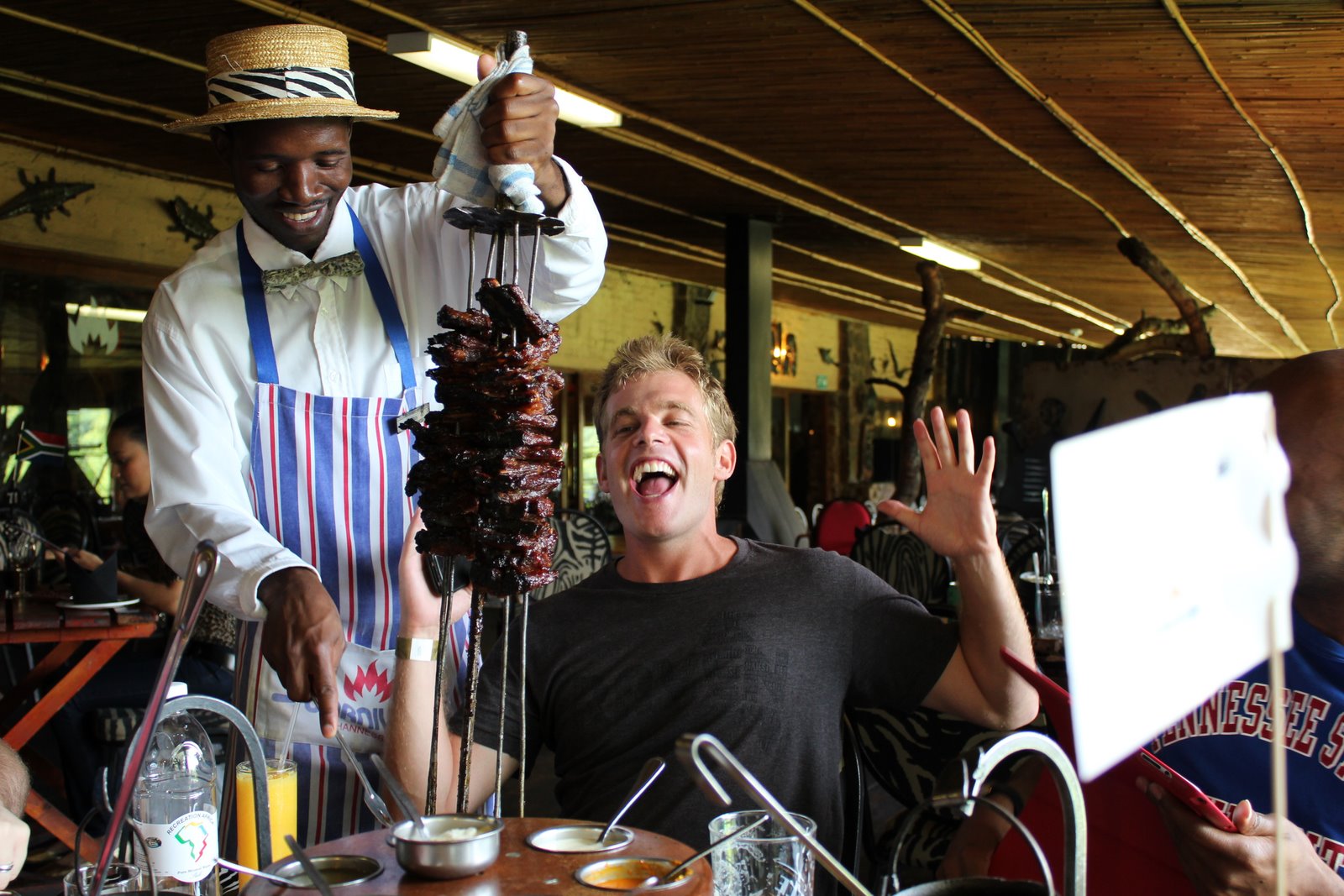 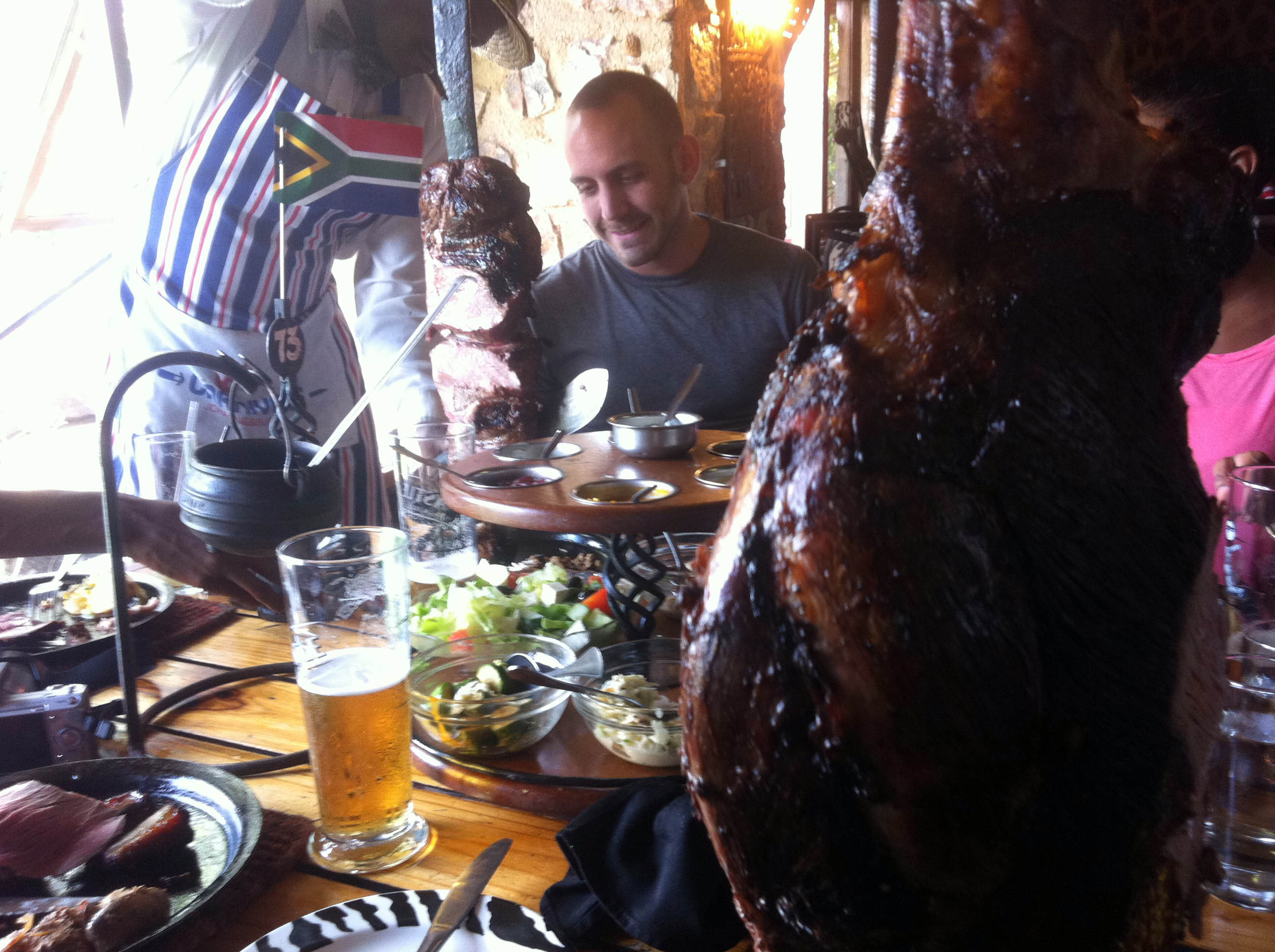 Afterward we decided to continue our quest to know more about the birthplace of humanity by visiting the Sterkfontein Caves. They have several tours a day that last roughly an hour and a half.  Before the tour you’ll hang out in the waiting area which has countless displays on evolution. Afterward you’ll be greeted by your guide and you’ll start your descent into the caves. The entrance you take is new and was blasted for easy access, supposedly the entire system was considerably more difficult to access before it became an attraction – that makes sense, yes? 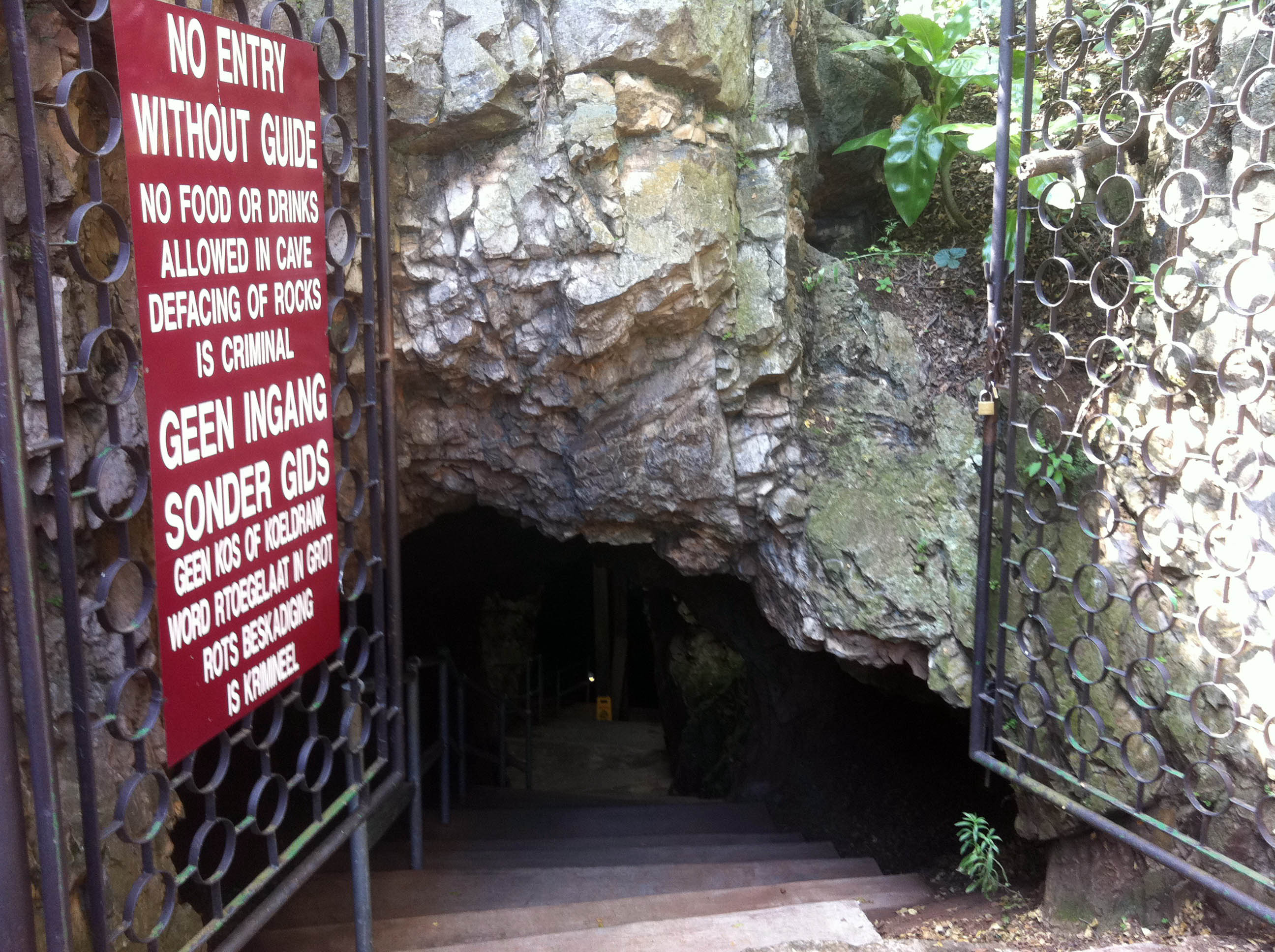 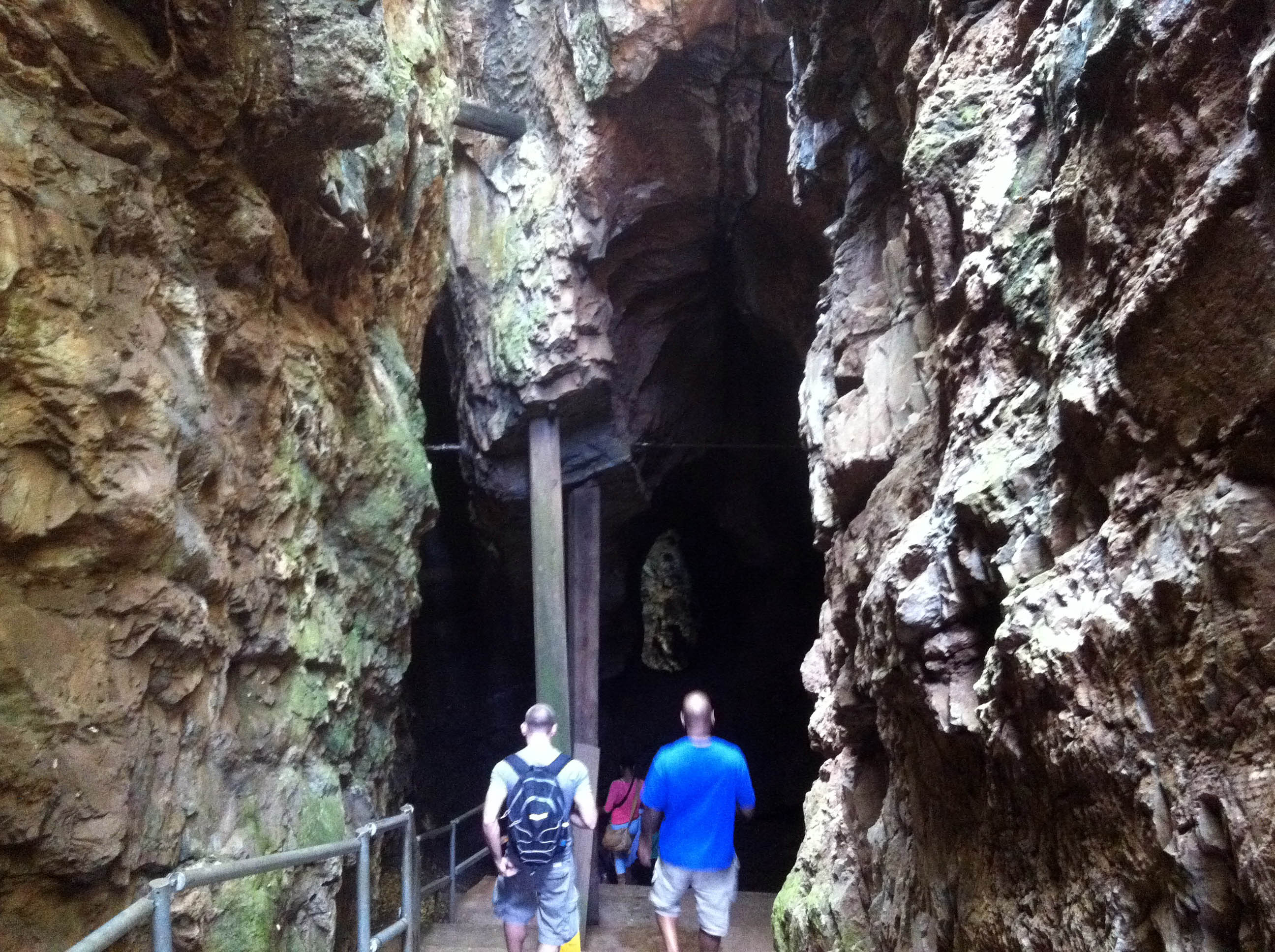 You’ll walk down 200 odd steps into this cave and see where they found the remains of “Little Foot”, after that the guide will explain this and that about the caves as you walk through. Besides being the oldest remains ever found, another thing that makes the find so special is that it’s basically a complete skeleton including 32 teeth. Near the end it gets very tight so if you’re really big or have troubles bending down, I’d just say skip it.  The temperature is nice and cool down there and if you like exploring or an easy hike, it’s worth doing. At the end there is a statue of Robert Broom with a skull from early man. If you rub his nose you’ll get good luck and if you rub the skull you’ll get wisdom. I figured you can never get enough luck so naturally went for the nose. 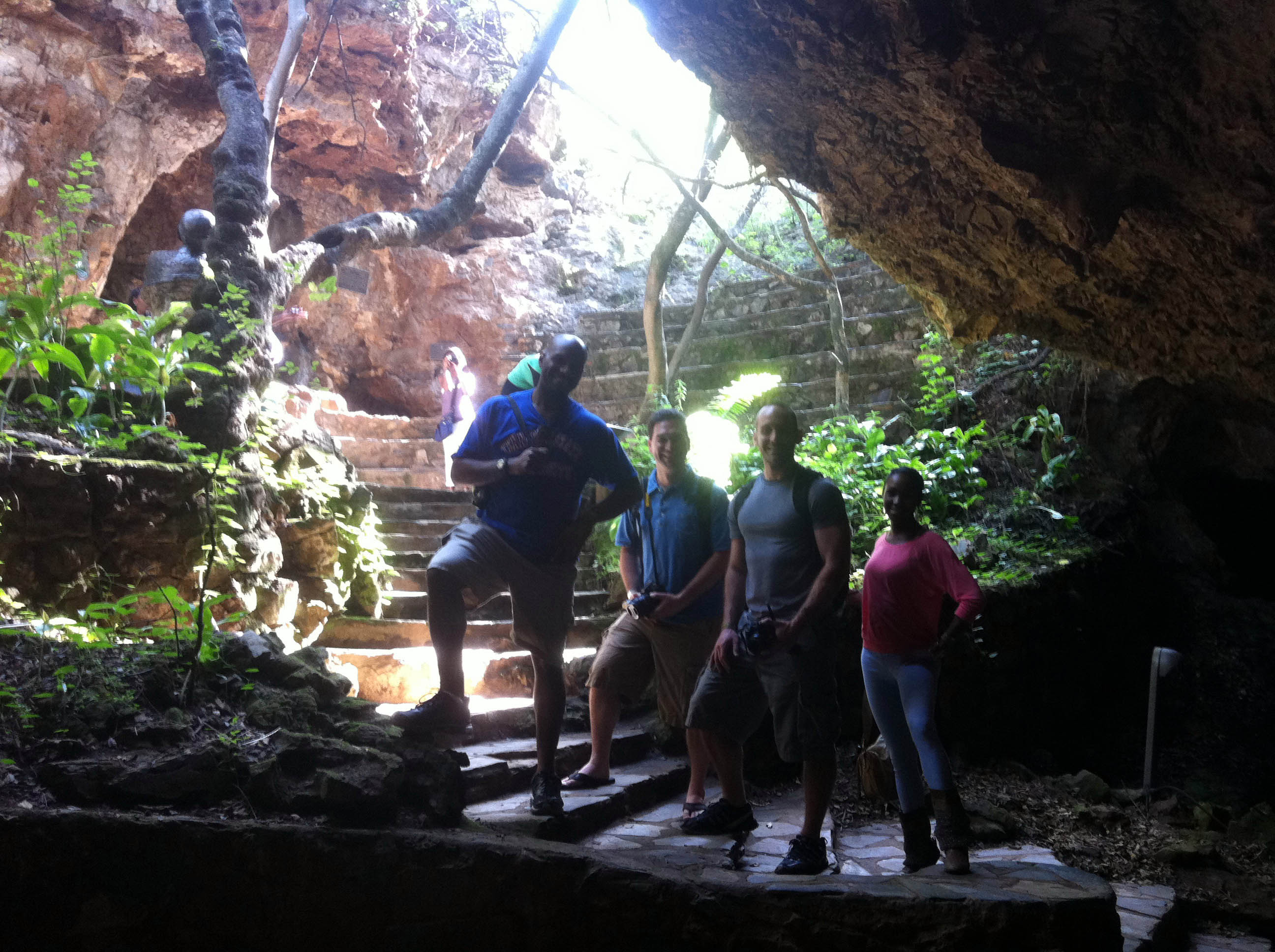 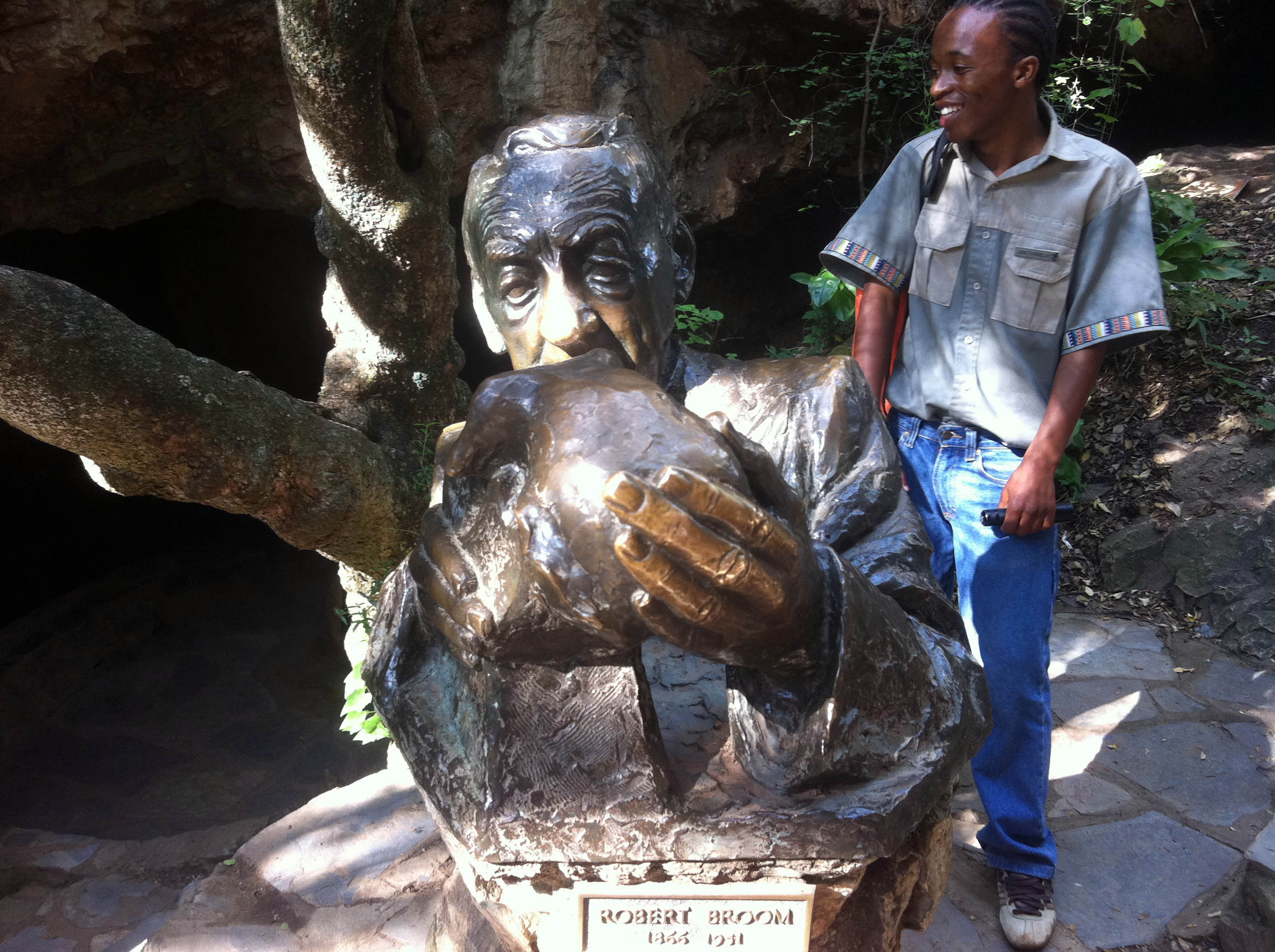 Today was interesting and educational to say the least. Really enjoyed Maropeng and it brought out the kid in me, if you go it will probably do the same for you. Carnivore wasn’t lunch or a meal, it was a unique experience and one that I’ll hopefully do again at some point, my stomach naturally says otherwise in egregious protest. The Sterkfontein Caves were cool and an easy way to finish the day. 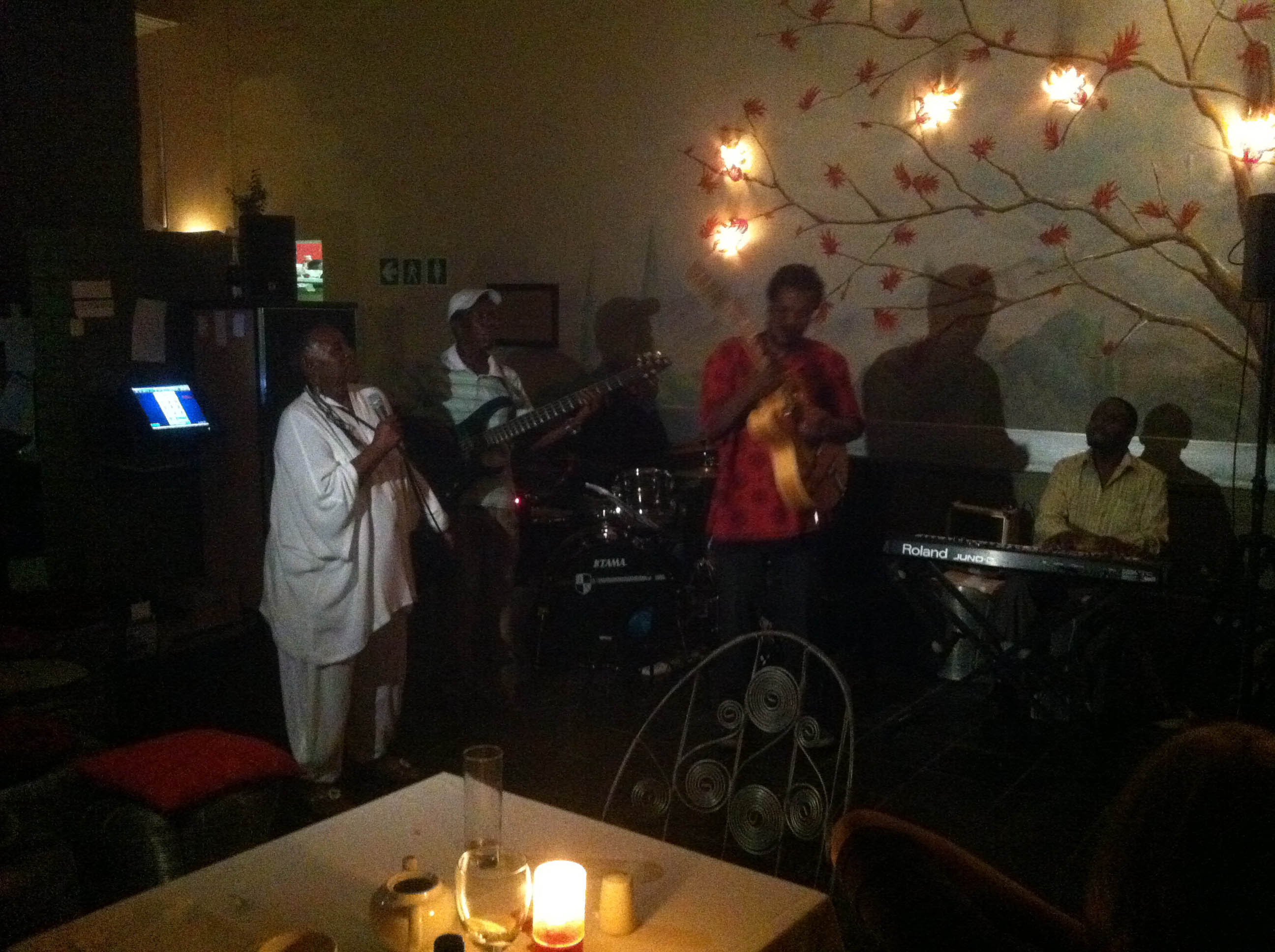 To finish this most carnivorous day we headed to Lucky Bean Restaurant in Melville where we enjoyed ostrich spring rolls and some great jazz music by Pinise Saul and Bheki Khoza. This was there second performance in South Africa since 1974, pretty lucky to hit up the restaurant on the right night, yes?

7 thoughts on “Trip to Cradle of Humankind & Carnivore, South Africa”