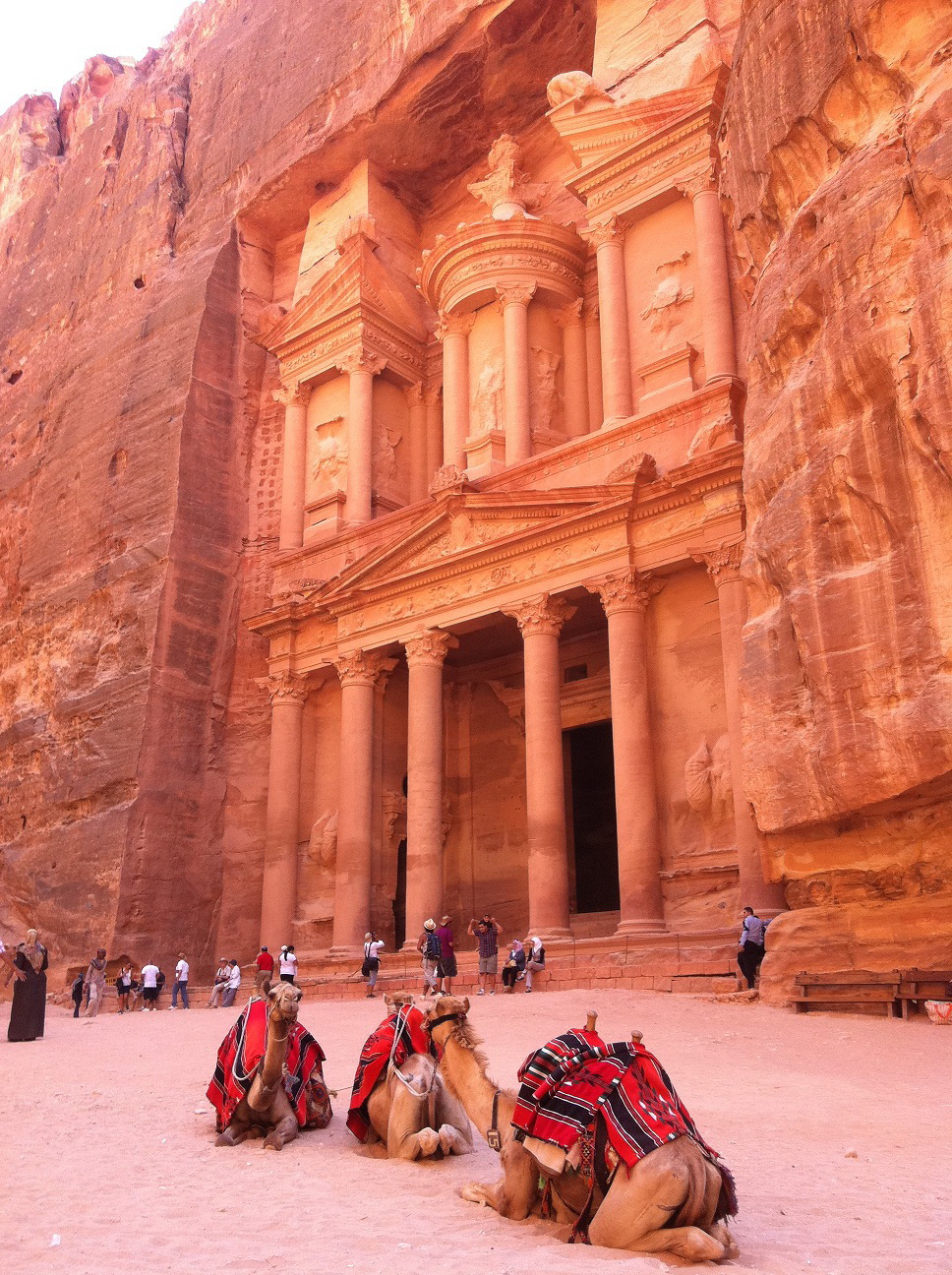 You can travel to the ends of the earth in a lifetime or only as far as your corner store and you’ll be equally prepared for the sights that are Petra, Jordan. Nothing can prepare you for the sense of euphoria that overtakes your body like that Lexus did on your way to work the other day. When you start weaving near the end of the siq and your eyes get their first glance of the Treasury, you’ll feel something that can’t be replicated, duplicated or anticipated. 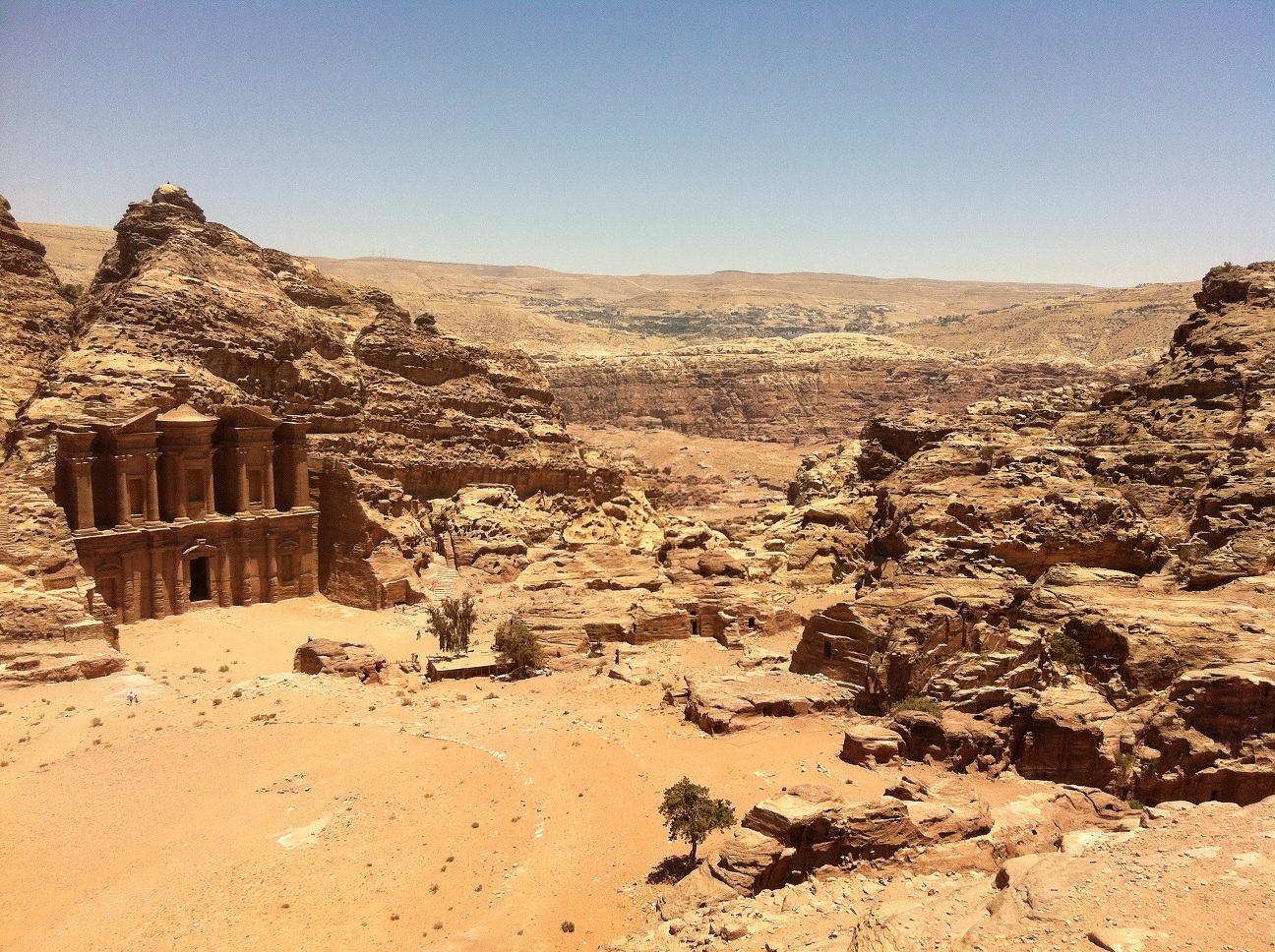 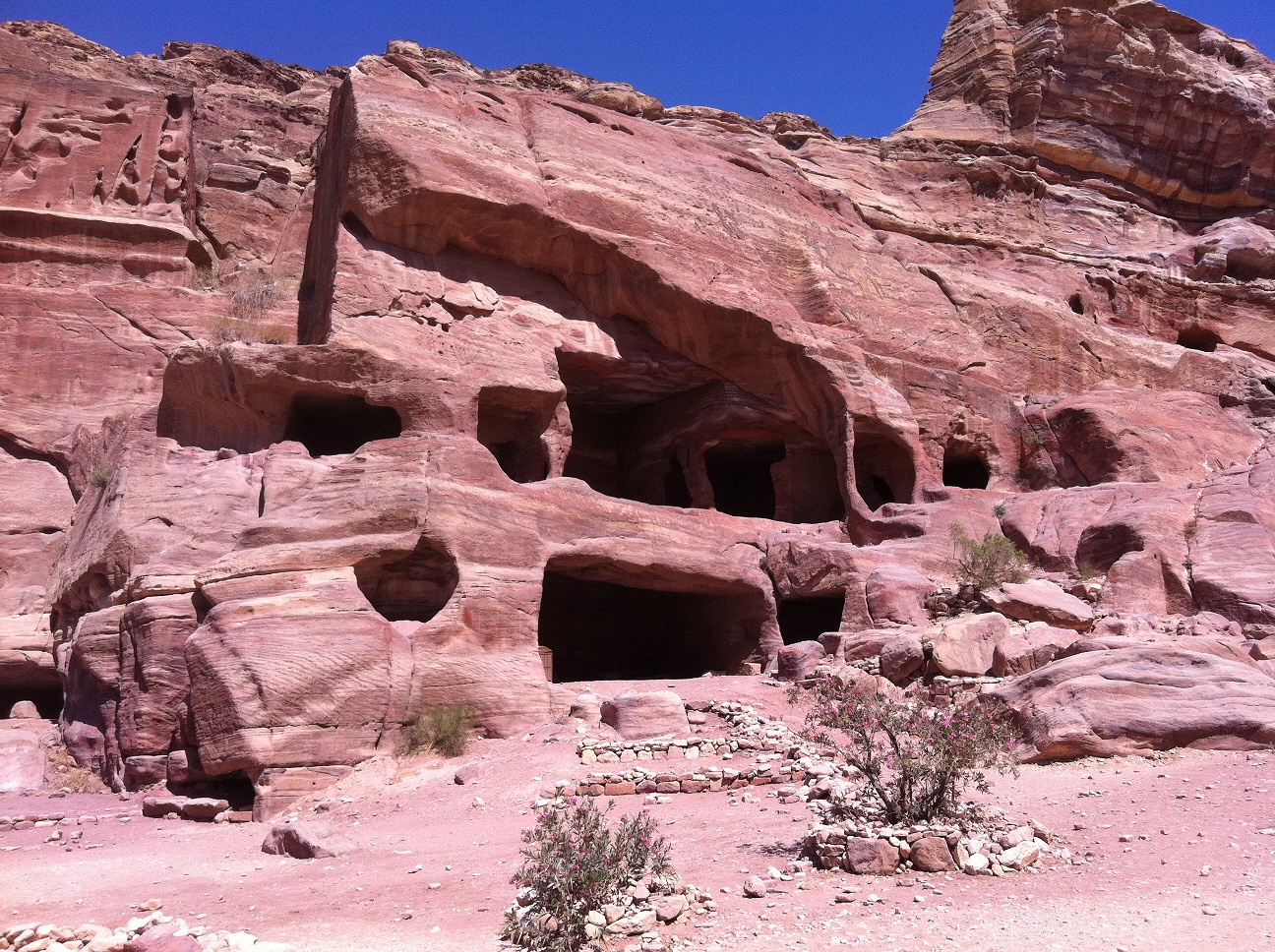 Having seen a few sights in my time, nothing compares to it. How did they do it? It’s impeccable, not to mention the attention to detail. You’ve heard me go on about old cities and the “wow, how did they do that?” This just leaves you speechless, it’s tall, so well sculpted, well maintained and not to mention, where they filmed part of Indiana Jones… The reality is that it wasn’t even built as a treasury but a tomb for a beloved king. 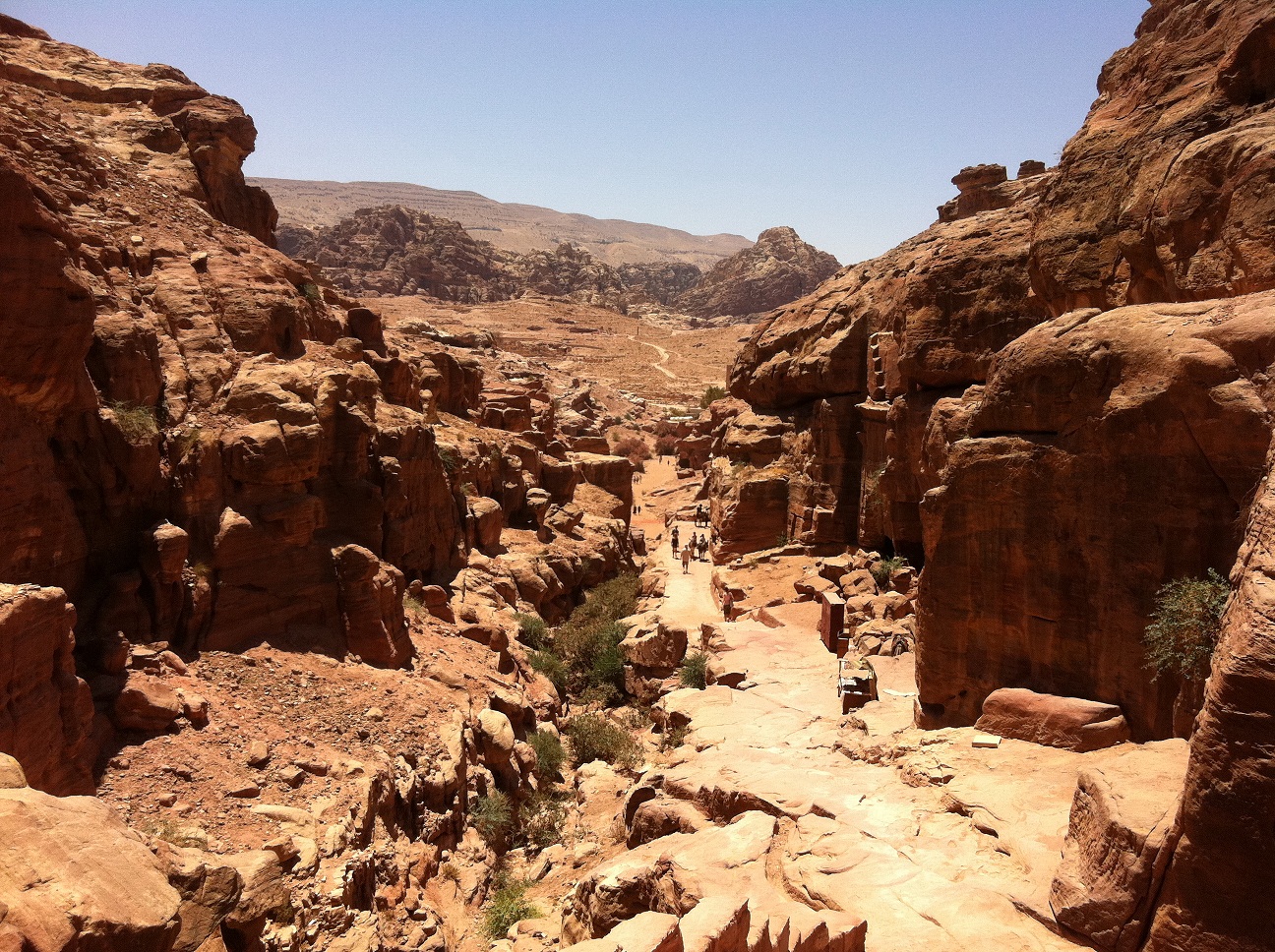 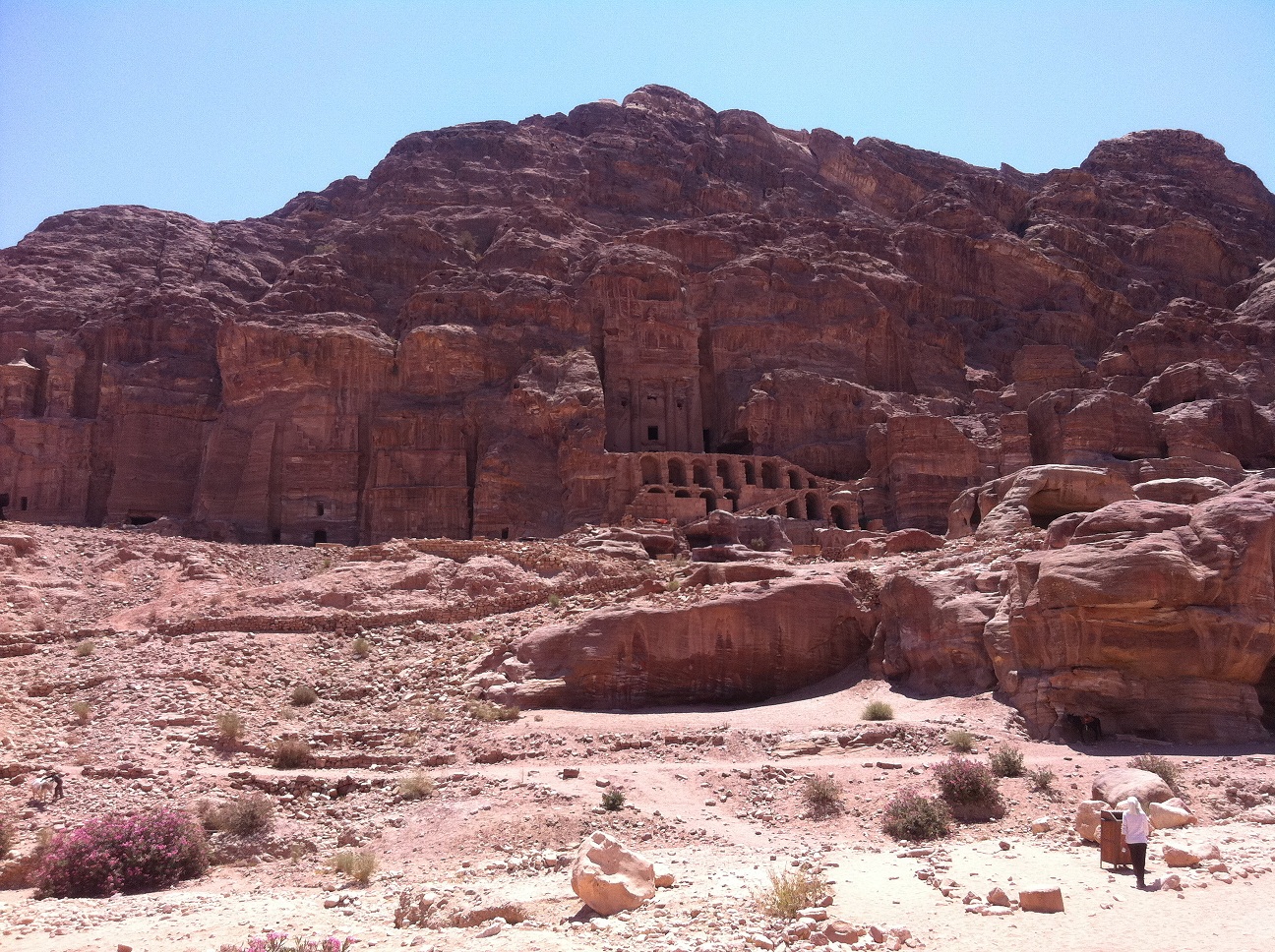 Now that the initial “Wow” is out of the way, let us continue where we left off, shall we? . Please read the following full history of Petra. The long and short of it is that settlements in the area date back as far as 6th century BC. It’s strategically placed along the old incense and spice routes. Also made for a brilliant caravan stop. The people would offer the weary travelers food, water for their camels, safe place to sleep, recharge, some basic trade and safe passage onto the next leg of their journey. 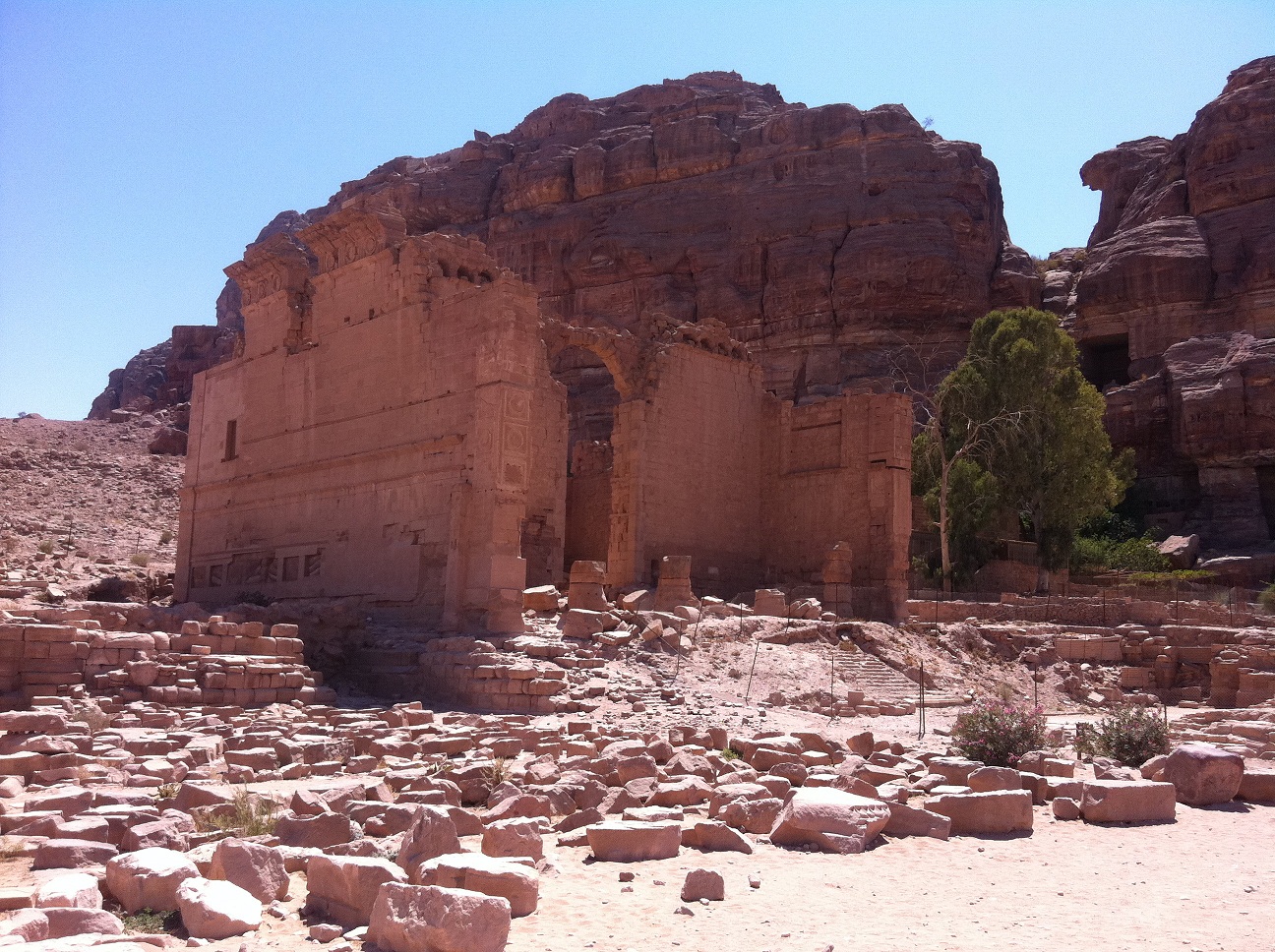 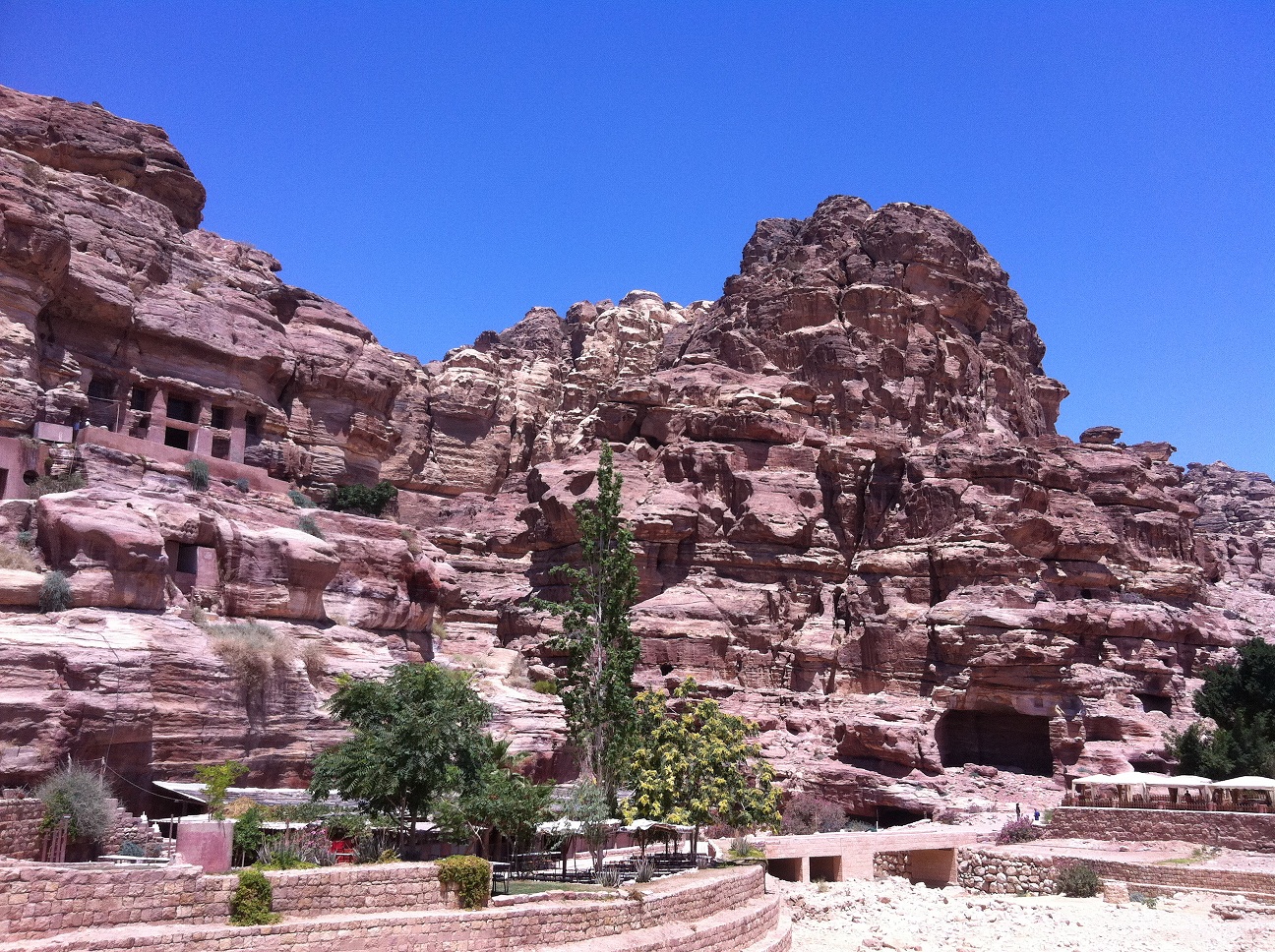 The treasury is brilliant but let us not overlook what also shocked me, the ancient dam and water conduits. The siq is about 2km and weaves through the mountains towards the basin. Along the right hand side about 3 feet above the ground is a cleverly carved out piping system that is reinforced by pottery that provided fresh water for the people. Along the left hand side, similar minus the pottery piping to provide water for livestock and agriculture. There were small basins along the way that would let the sentiments from the water sink, think of it as an early days filtration system. Supposedly it was not the dry desert that it is today at the time of inception. 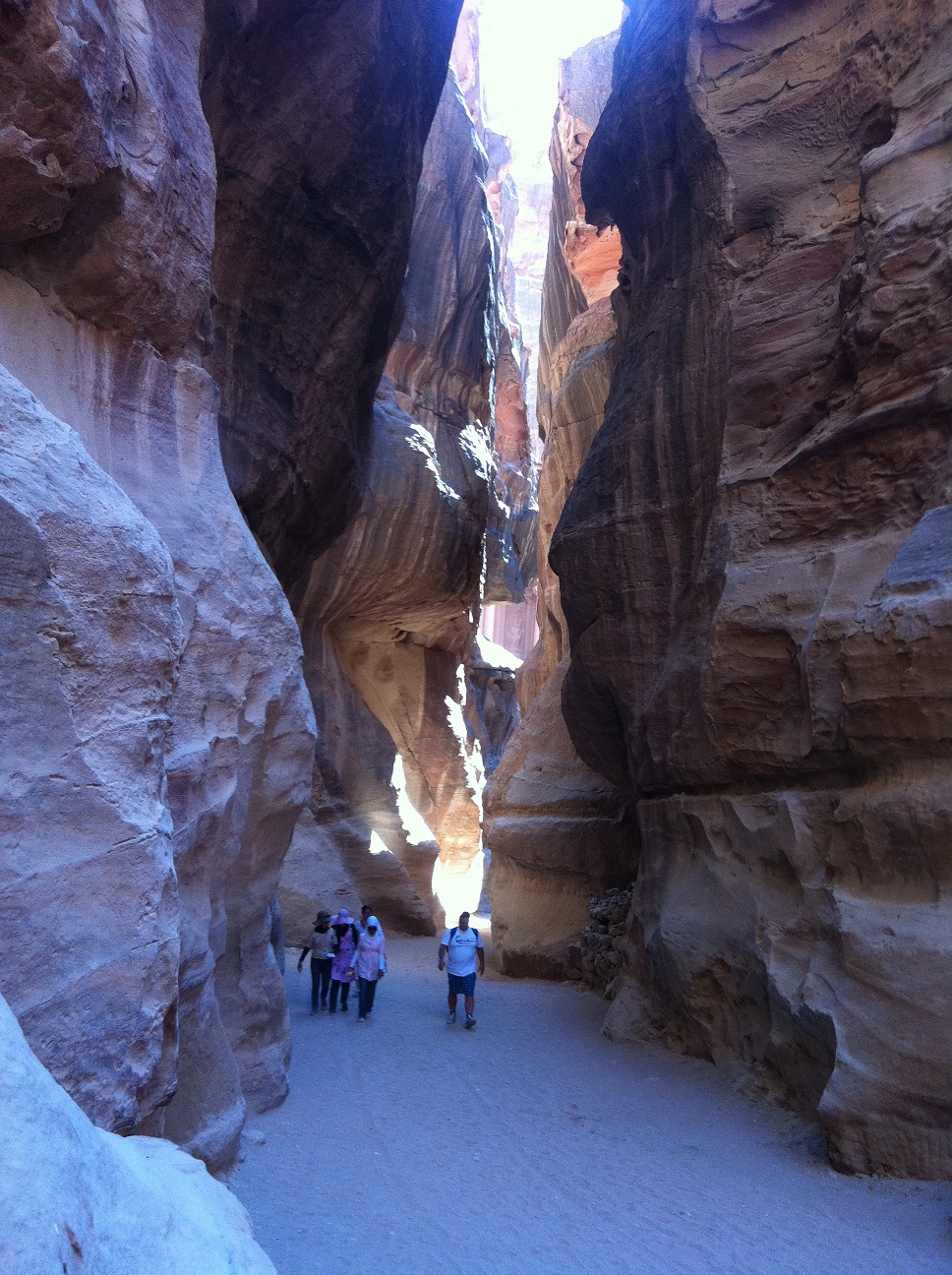 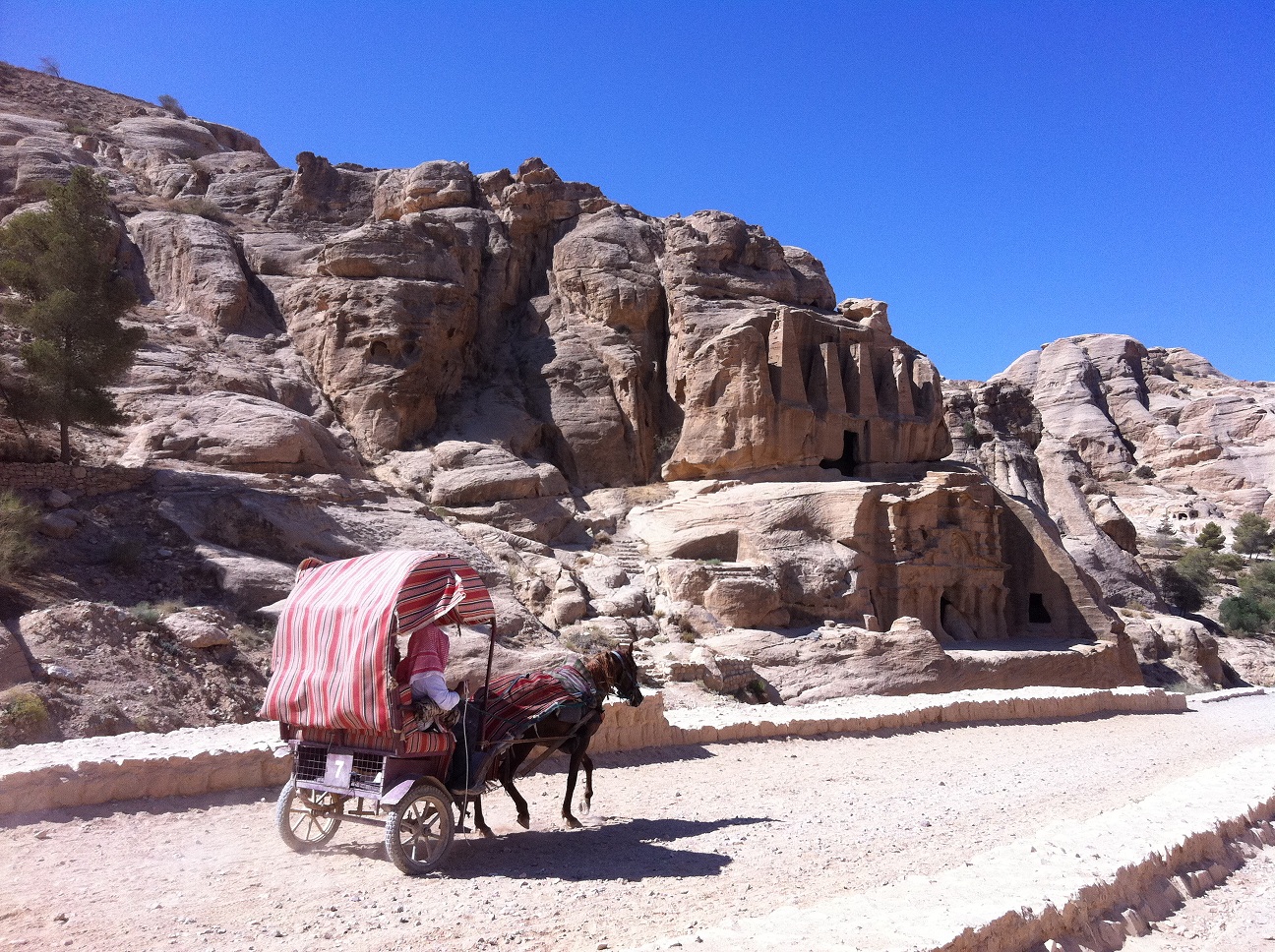 You’ll wind through the siq until you arrive at the treasury. As stated above, you’ll probably just stop in your tracks when you first lay eyes on it, it’s everything you thought it would be and more. Saw some guides having people close their eyes for some “other reason” and pulling them round the last few corners so when they open their eyes they are there. My guide made no mention we were near, the surprise was half the sensation. It wasn’t built as a treasury, it was actually built as a tomb for a beloved king. 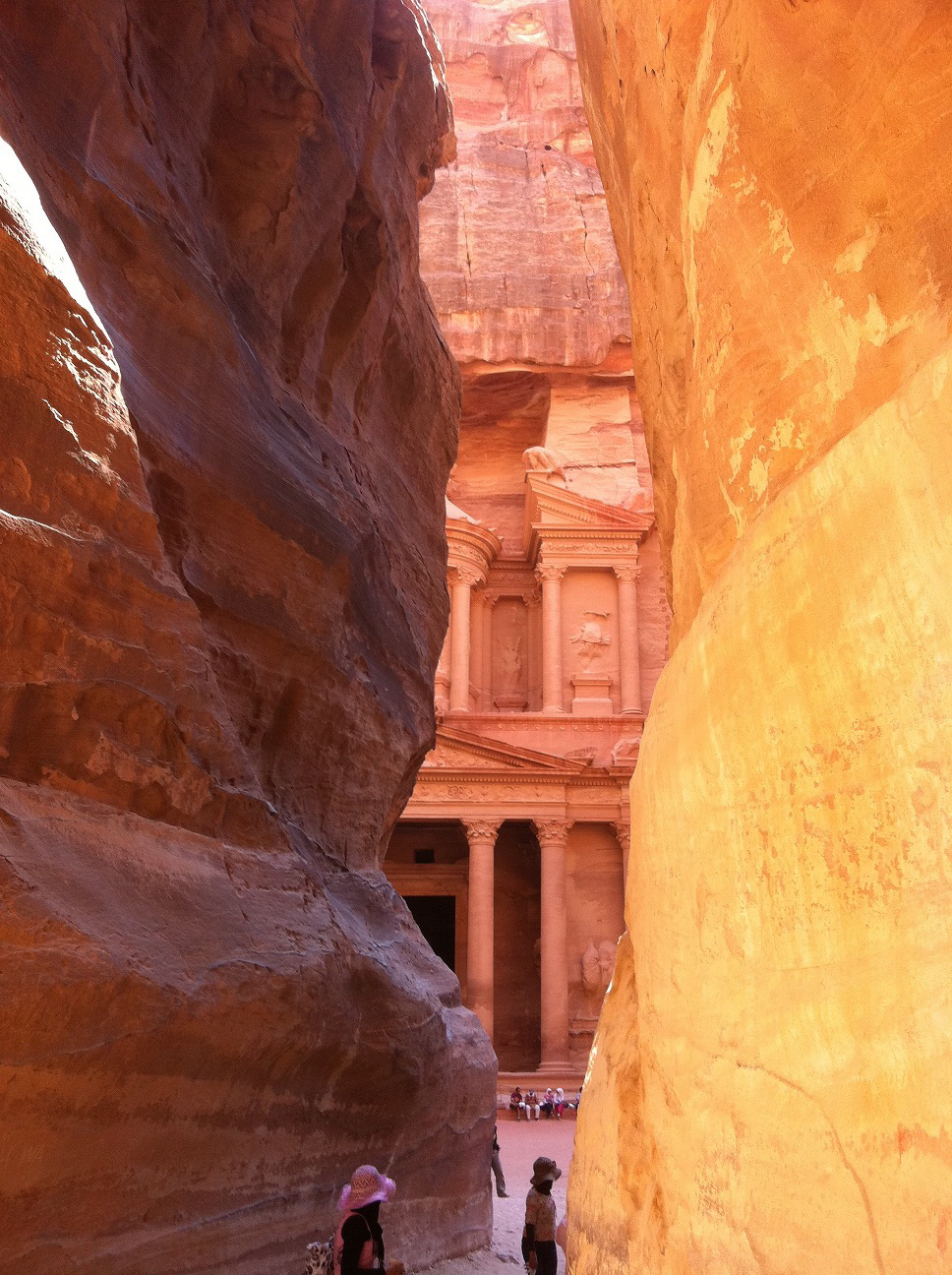 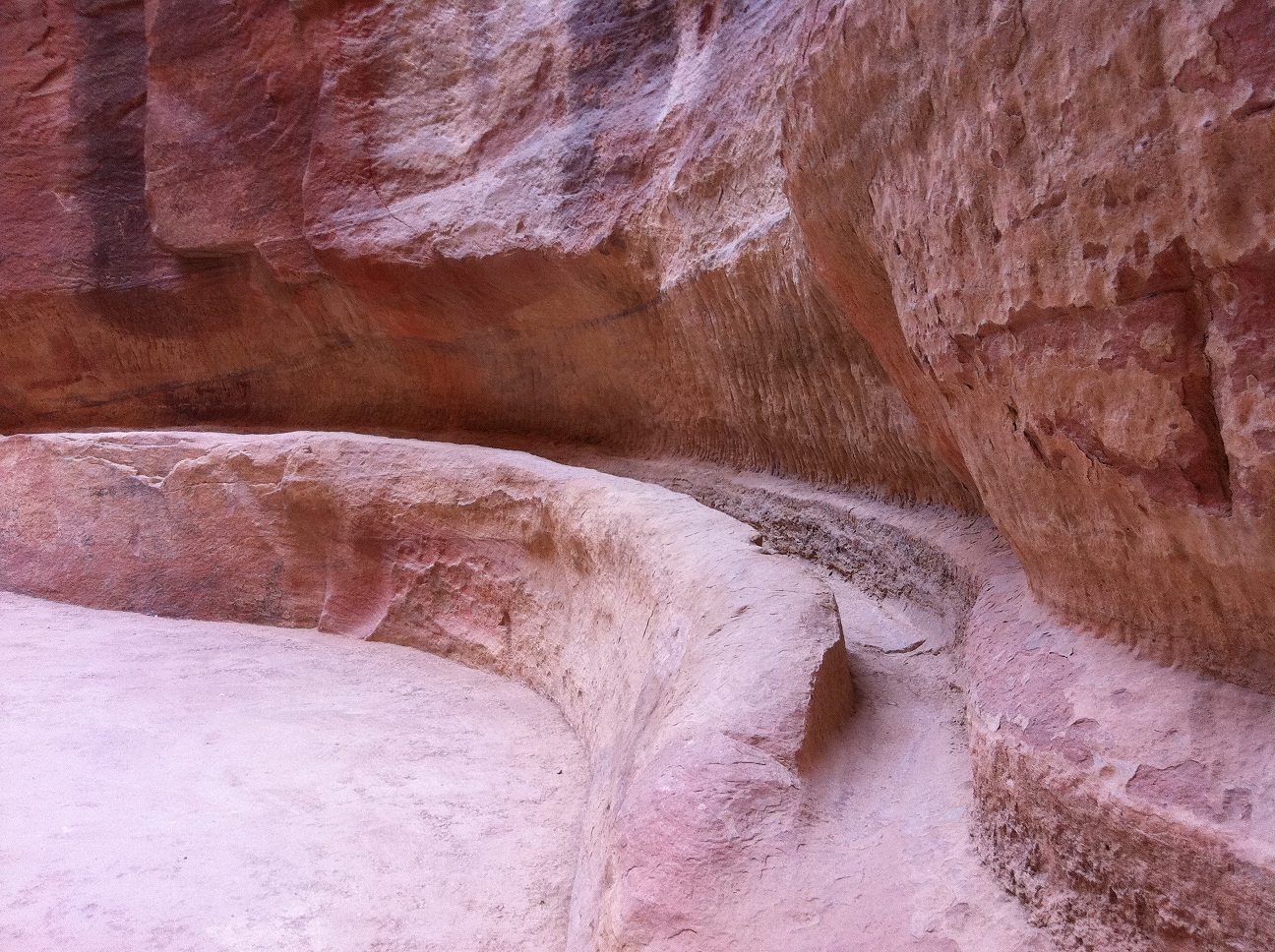 The treasury is about 2km into the city. Regardless of what age you are, you can make it there. Plenty of people offering horse rides from the entrance to the city entrance and then you can take a chariot down, talk about the original experience. Many stop there, it is another 3km on a slight gradual decline until you reach the basin. Camel rides are available if accessibility is an issue, saw many older ladies and gentlemen enjoying the service. The walk to the basin includes lots of interesting buildings, notably more tombs and a theater. 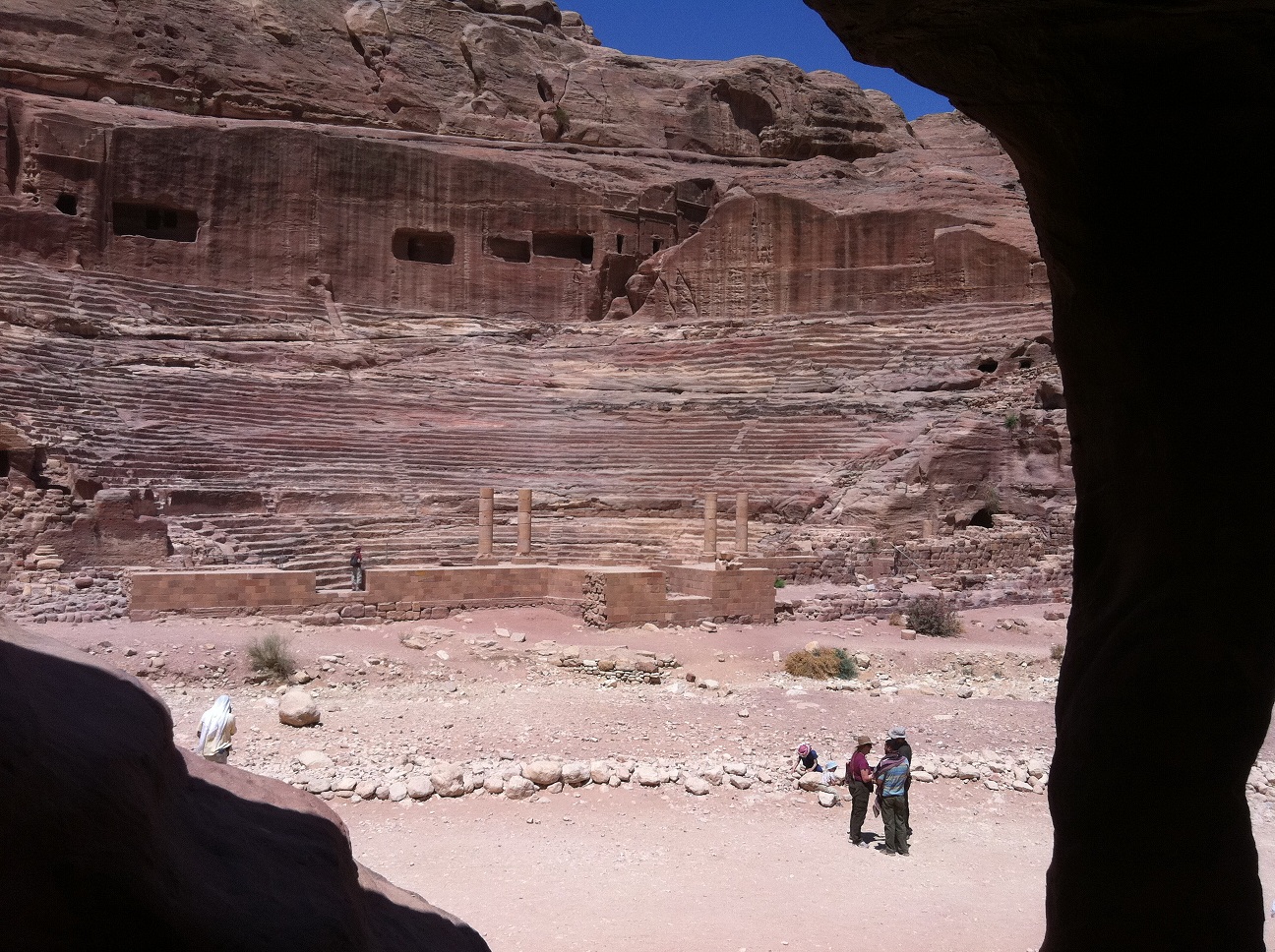 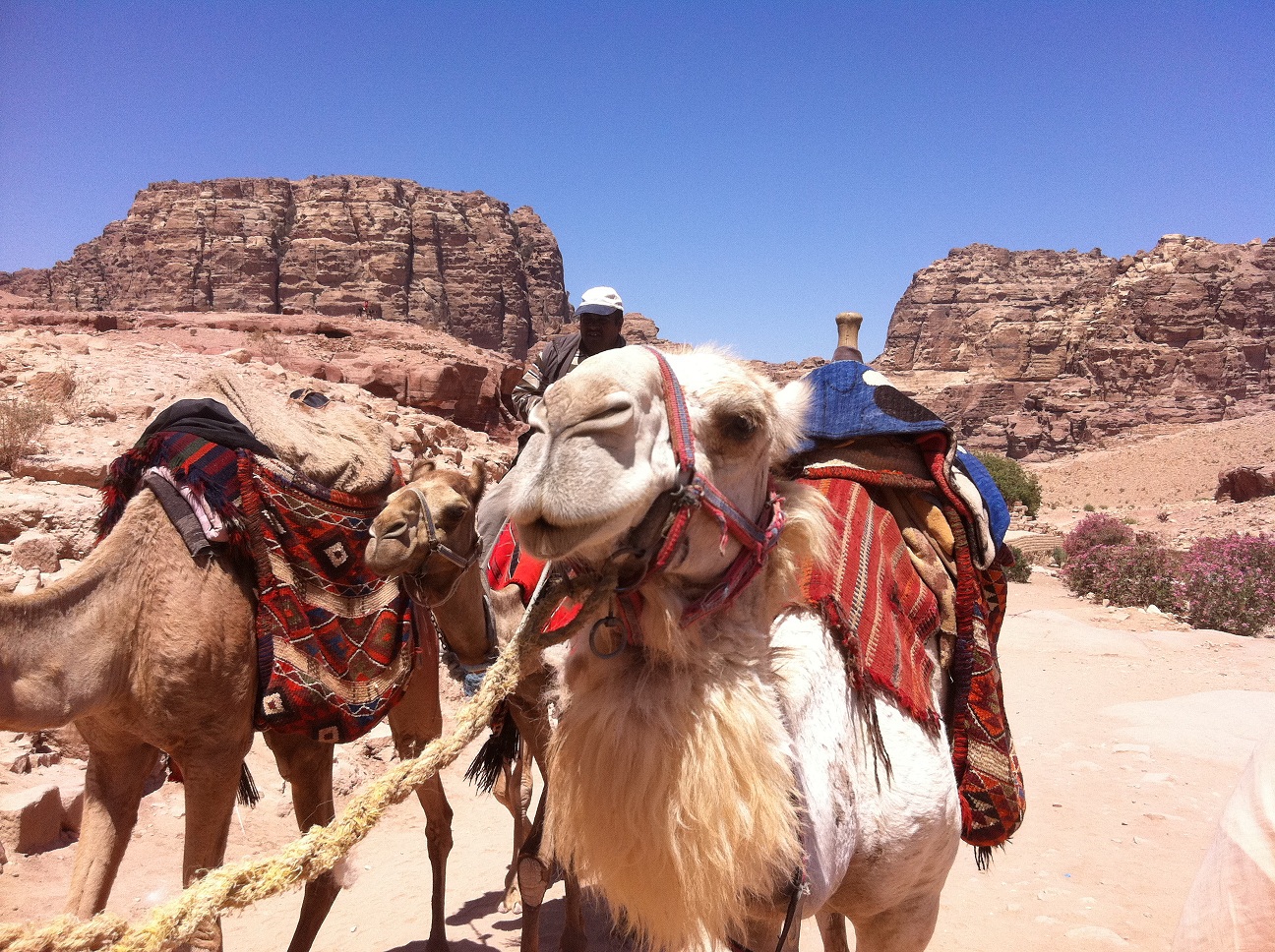 Upon arriving at the basin, you’re approximately 500M and then 800 steps to the monastery. Again, donkey rides are available for those without the stamina, I’ve seen those donkeys take some pretty “heavy loads” so fret not. The 800 steps is a spiritual experience after the 5km walk in the mid day desert heat. Recommend you arrive at Petra at 6am, there will be far less crowds in your photos and the weather will be much cooler. 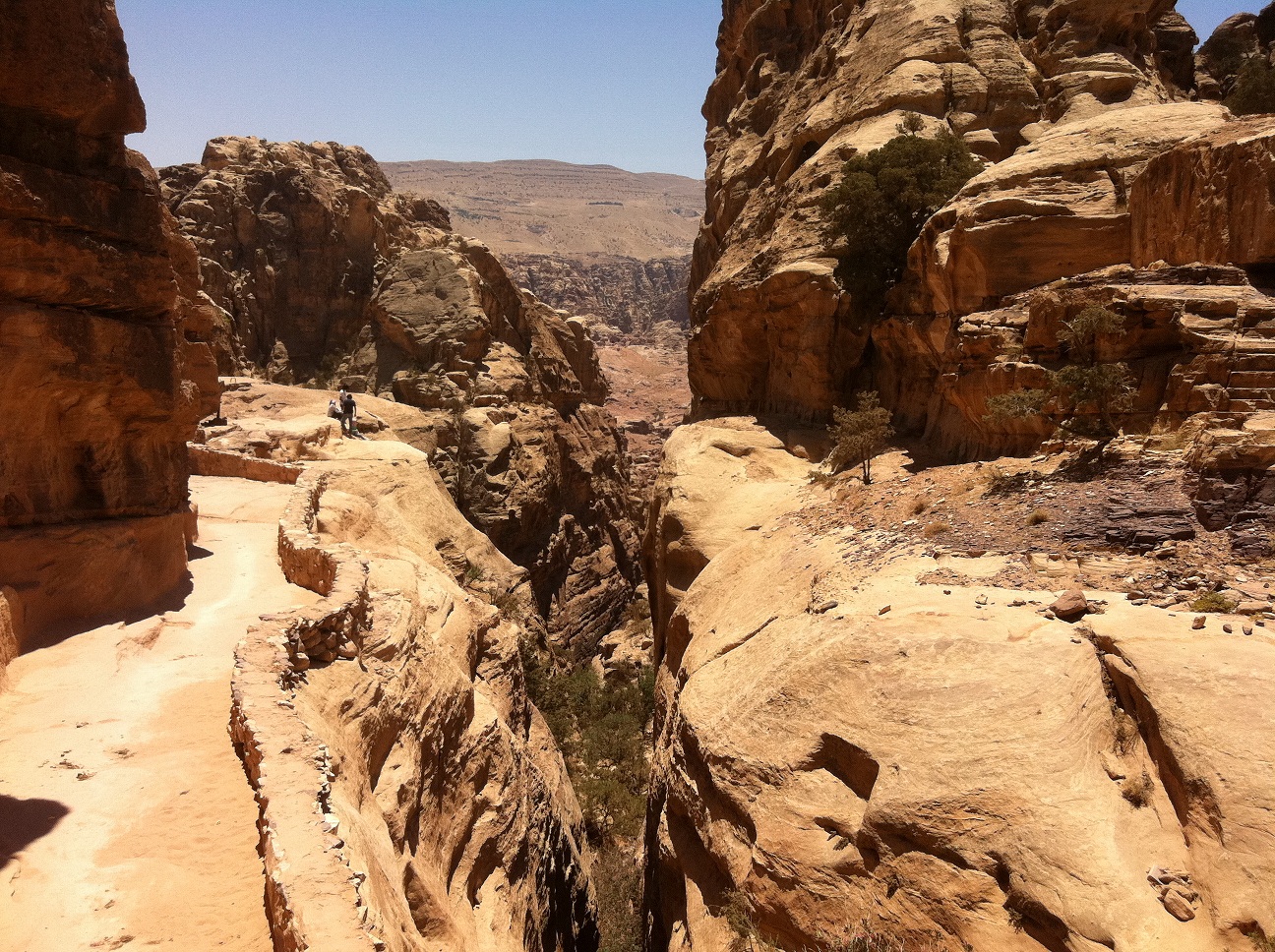 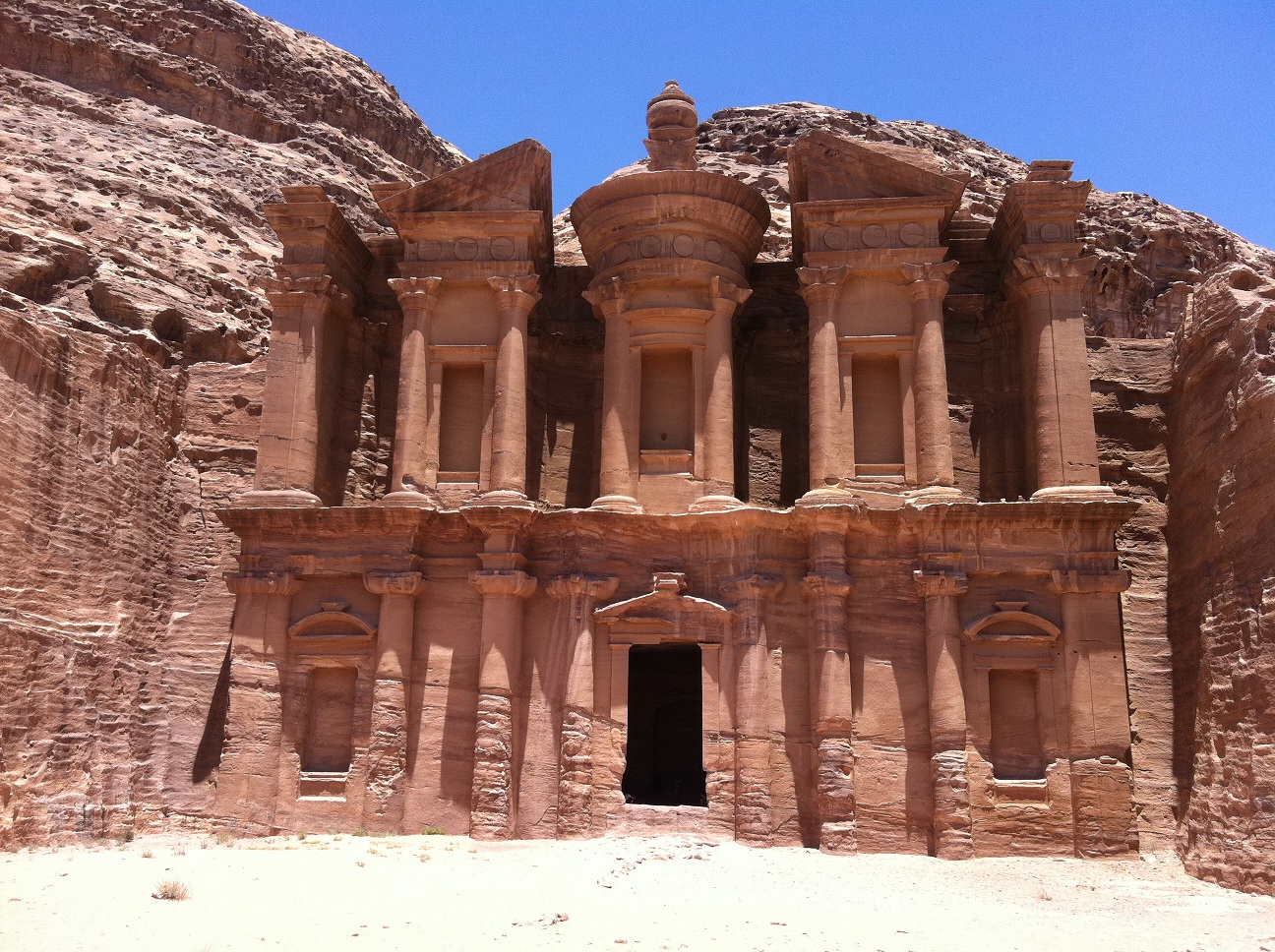 The 800 steps will take you to the foot of the monastery. It was also in the competition for being a “Wonder of the World” but lost out to the treasury. The treasury is in better shape but the monastery is more majestic in my estimation. It looks similar only on top of the mountains and considerably larger. Spent more time at the monastery partly in awe, partly out of fatigue. Along the way, stopped to smoke a hand rolled cigarette with a local Bedouin gent who runs a donkey business. He was friendly and the photo of one of the children hanging out on the donkey was with him. The term “Bedouin Taxi” refers to a donkey. 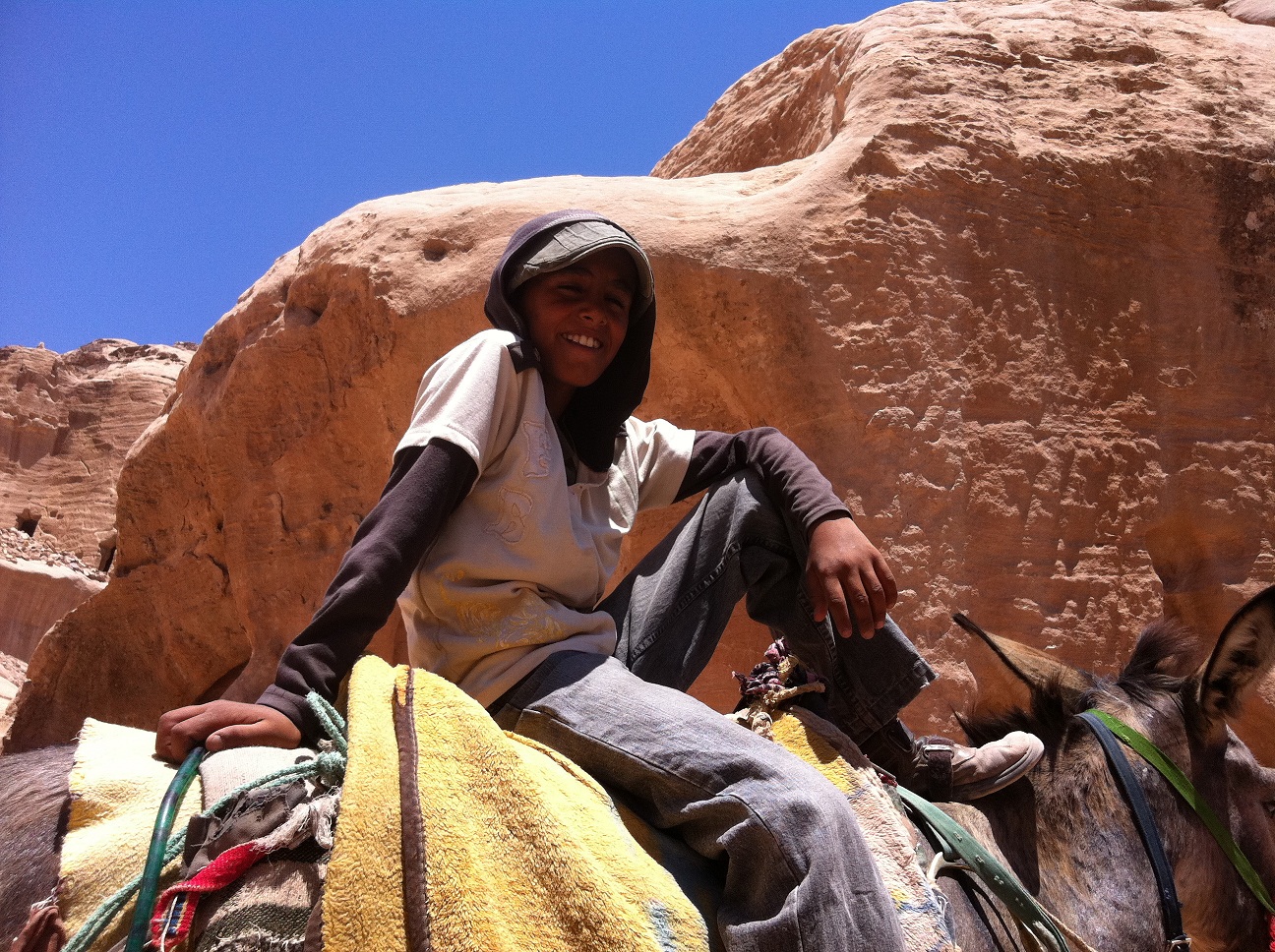 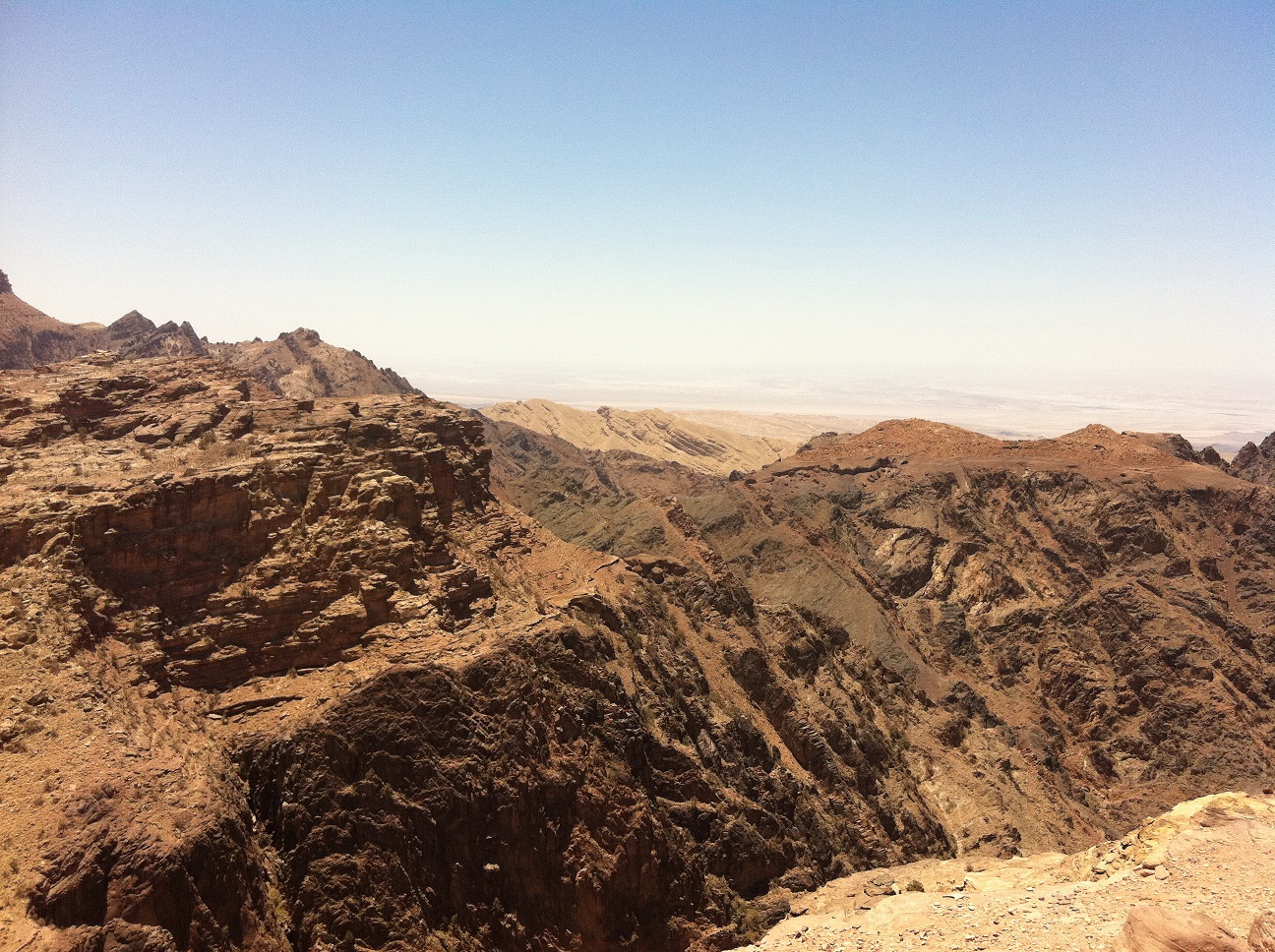 From the monastery one can hike another 5-10 minutes to the view point. Petra was filled with tourists from around the world. Luckily, yours truly spoke with any and all of them that came into “how’s it going range” and as a result, these two older ladies asked if I’d been. Was relaxing near the monastery, soaking in the persona of the place with Abdul when they came by and suggested it after some pleasant banter. Worth the extra 5-10 minutes. If you’re in the basin, you’ve come too far not to make the mission to the monastery, if you’re at the monastery… 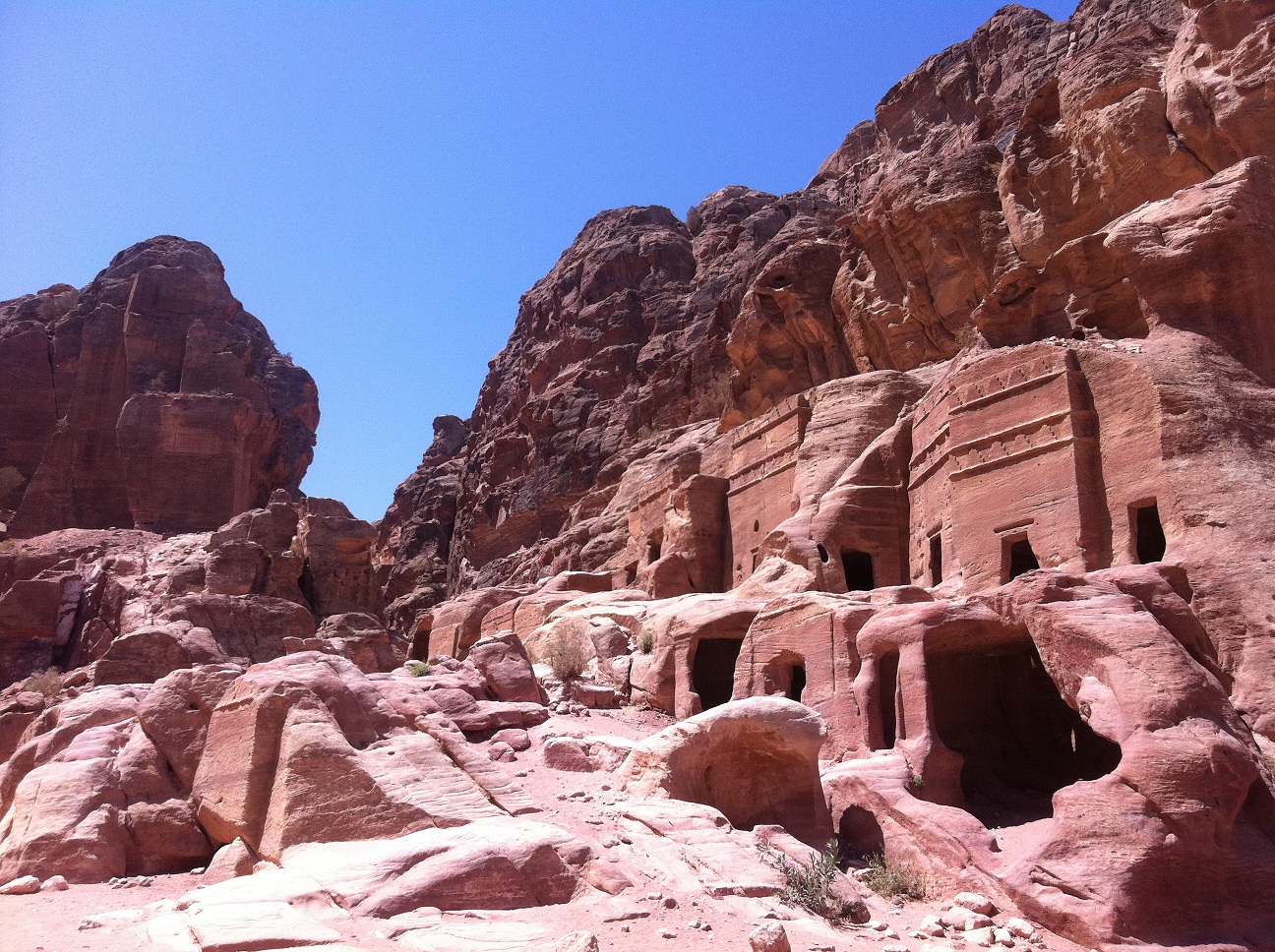 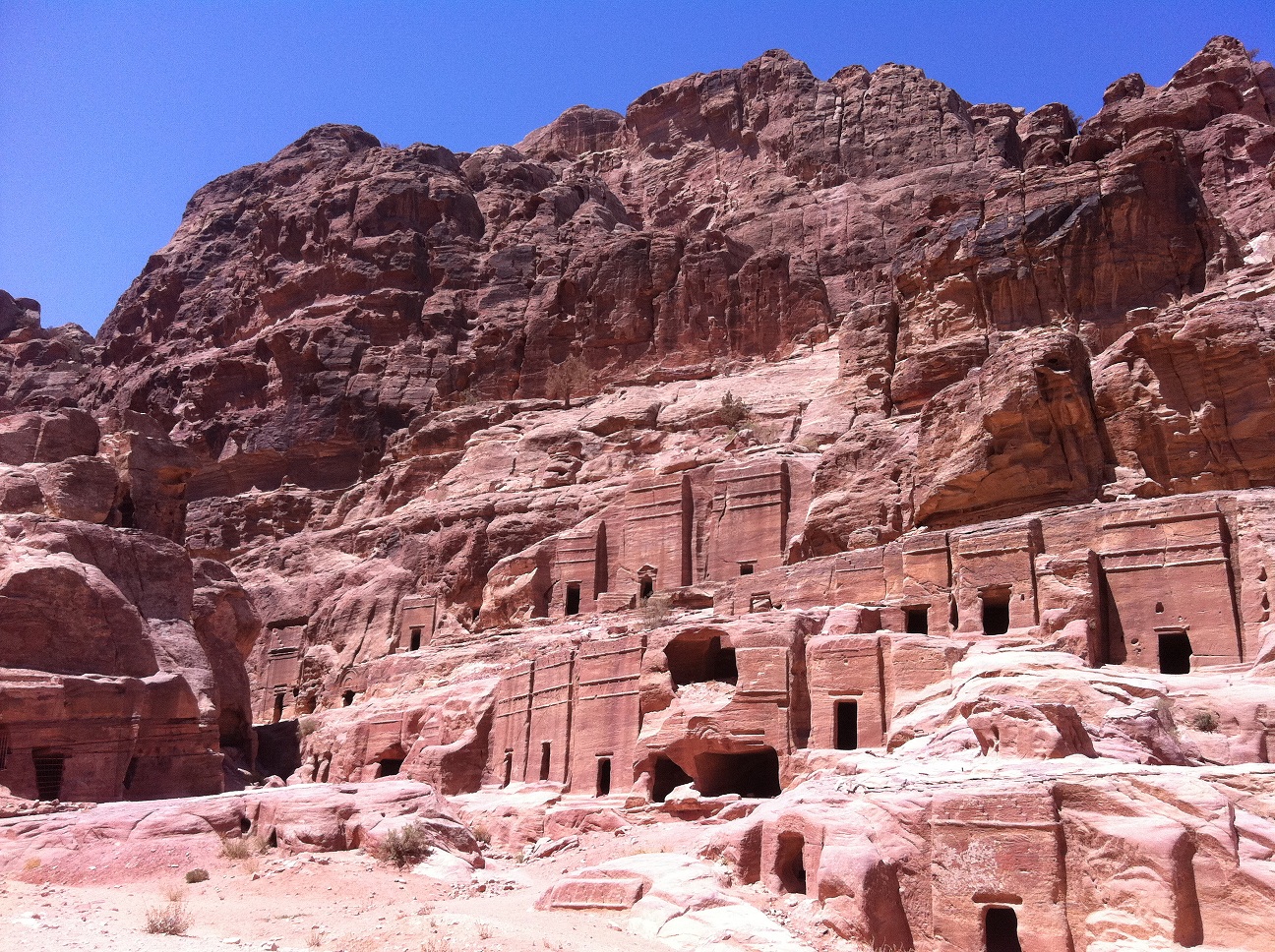 Afterwards we slowly made our way down. Abdul who is my guide is a very gregarious gentleman and knows several of the vendors along the way, we leisurely made our way down, being sure not to avoid a few minutes here and there to just kick back and soak up the whole scene. What a place it is, all the random sights and scenes I’ve seen tend to sink into the recesses of my mind when comparing it to here. It’s up there with Ankor Wat and Stonehenge in terms of “How?” 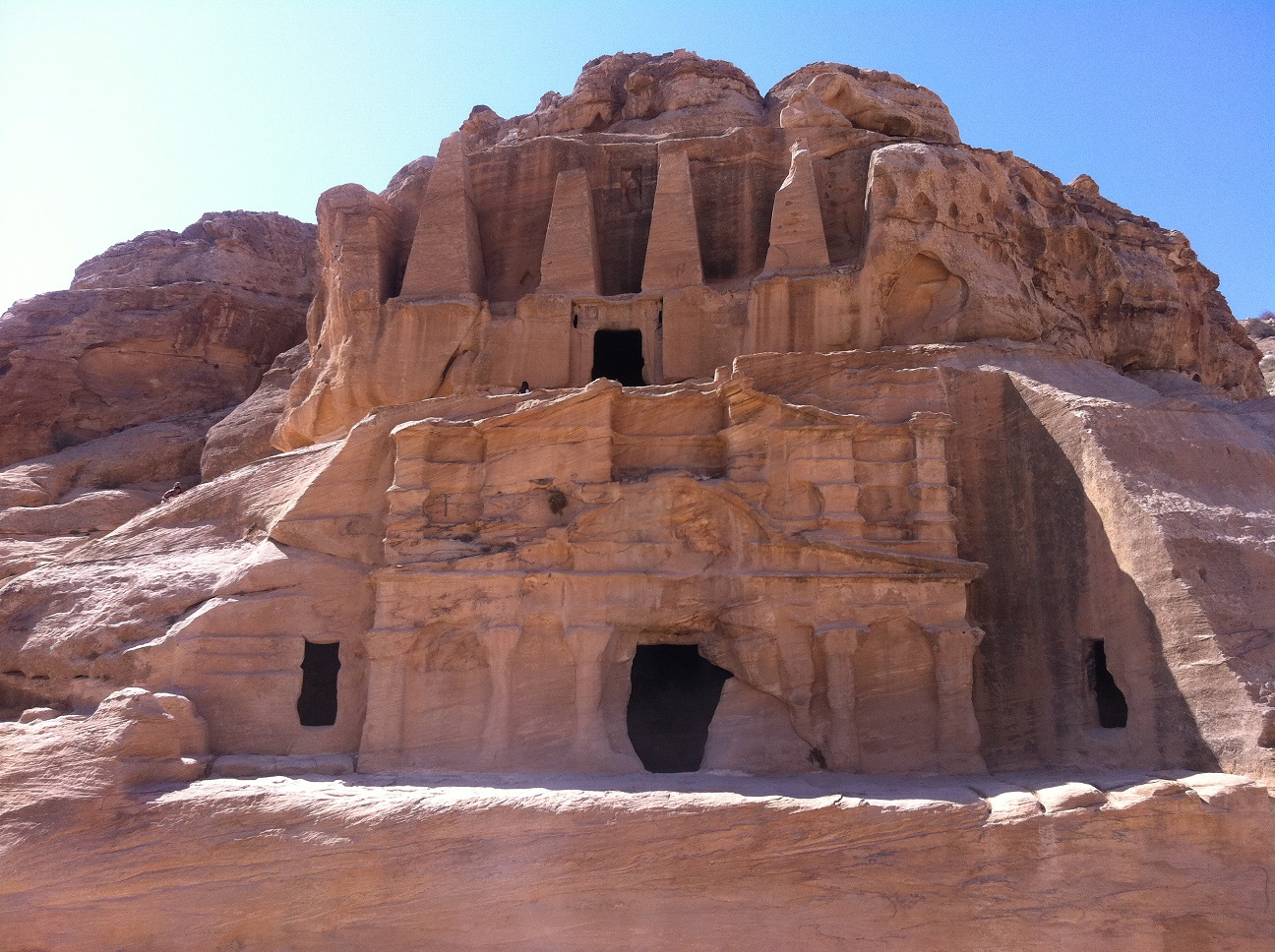 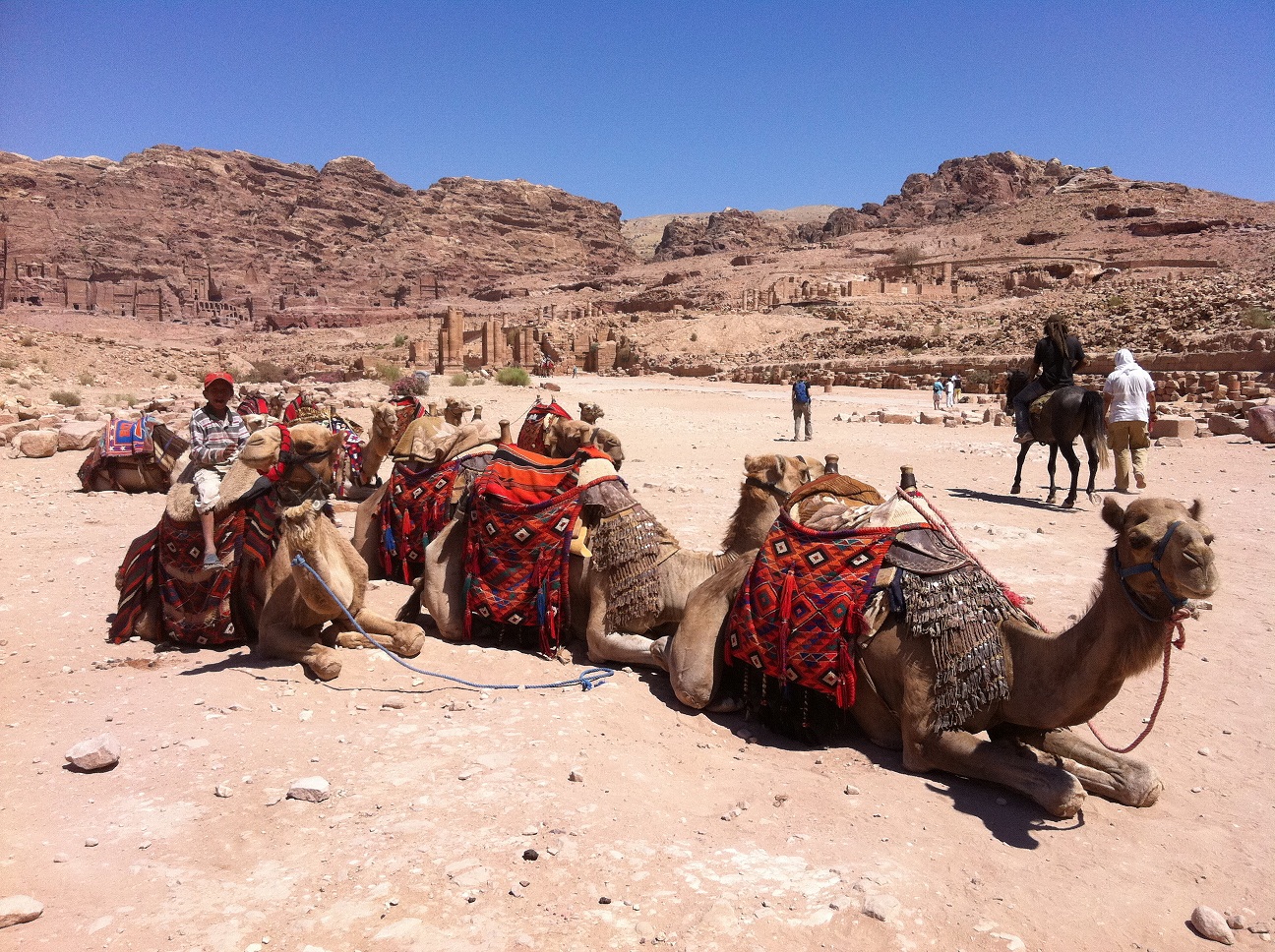 At the basin, they have a fine dining option for those of you interested. It’s the Crowne Plaza Basin Restaurant and is only open from 12:00-16:00 daily. It offers a buffet that is on par with what you’d expect anywhere around the world from that chain. Eat it up, just don’t over eat like I did or the final 5km hike home will feel like 10, you’ve been warned. 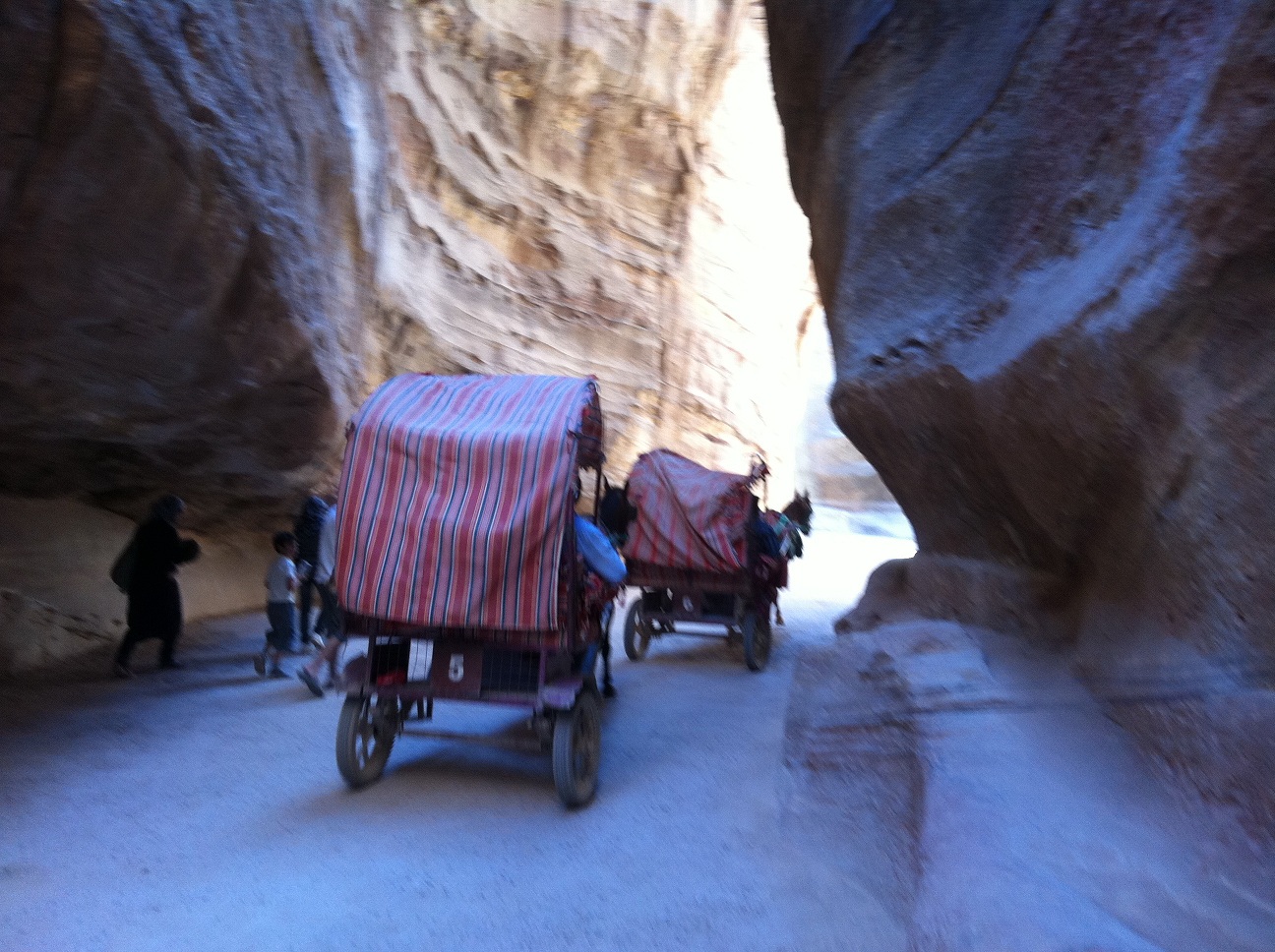 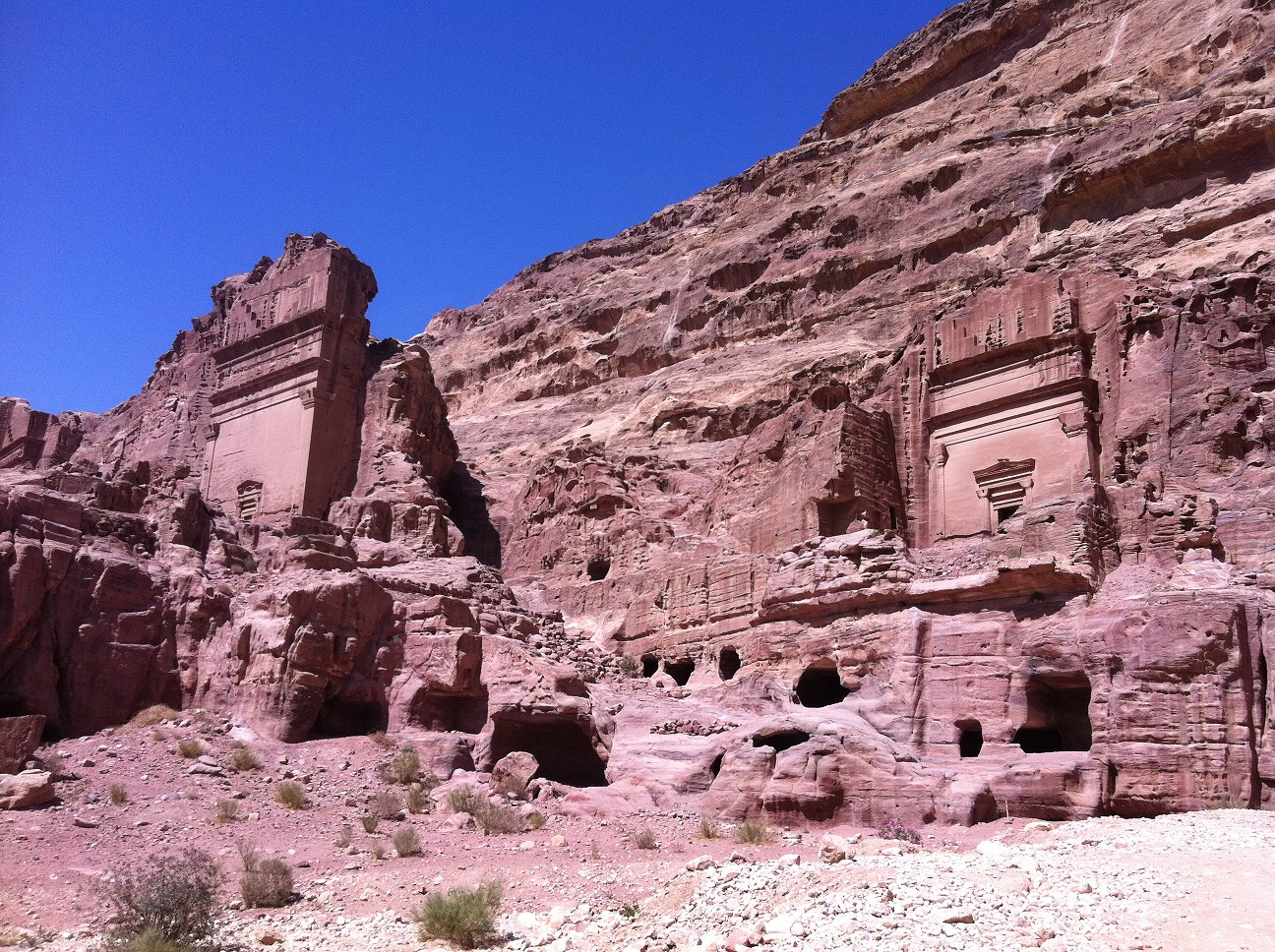 When passing the treasury for the second time, it’s no less amazing. You’ll probably take another 300 photos and sit for awhile at the cafe or on one of the many benches in awe. Afterwards that “gradual decline” you enjoyed on the way becomes a “gradual incline” and realize how long and extensive the piping system that was built truly was. The last 800 meters after you leave the entrance to town you’ll be feeling fatigued but relishing in the fact that “you’ve done it”, and enriched by the experience. You’ll also see and meet people from the four corners of the world. 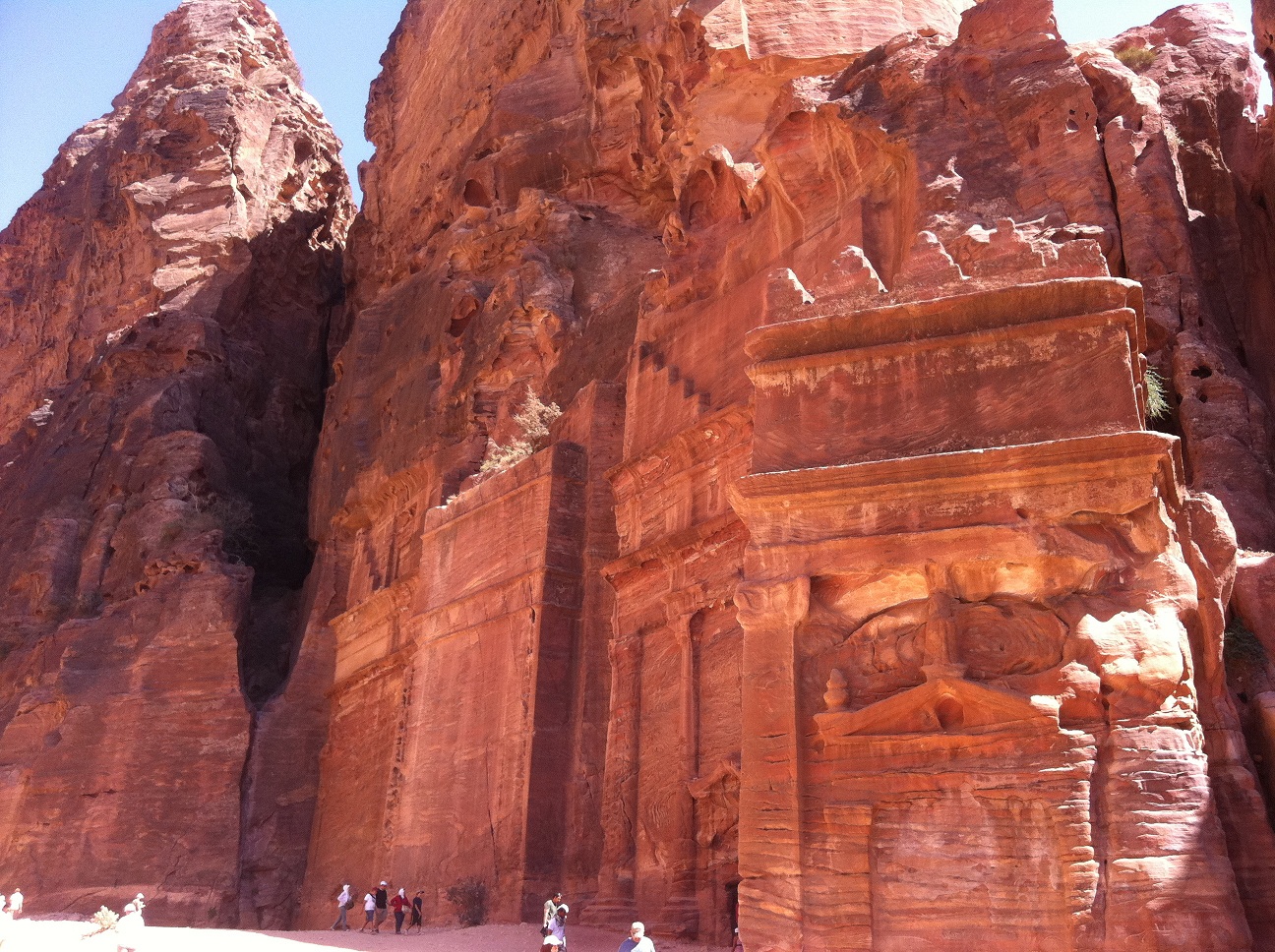 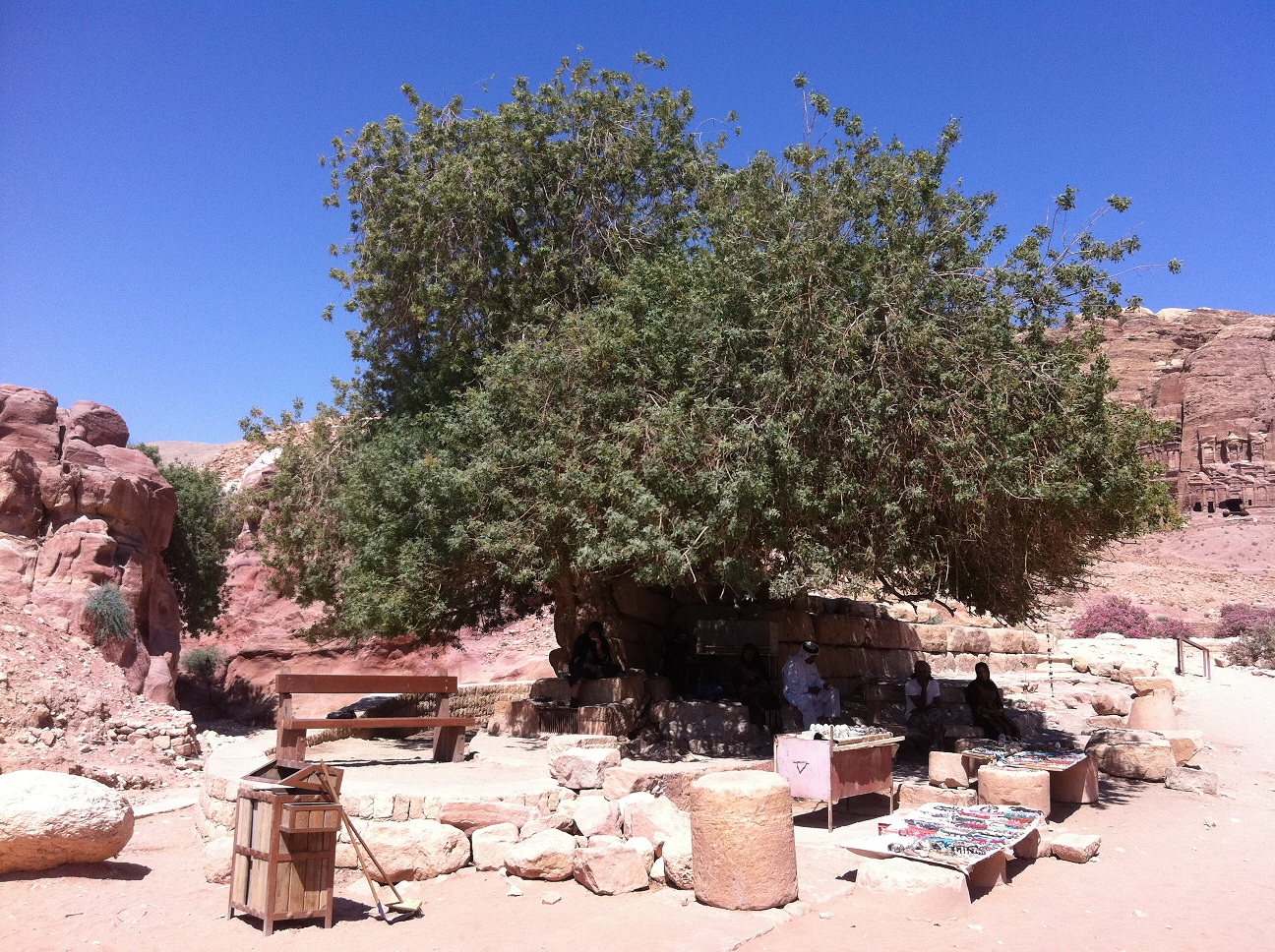 Tomorrow it is off to Wadi Rum.

— Below are the social media buttons, “sharing is caring” —

13 thoughts on “Experiencing the Pleasure that is Petra, Jordan”