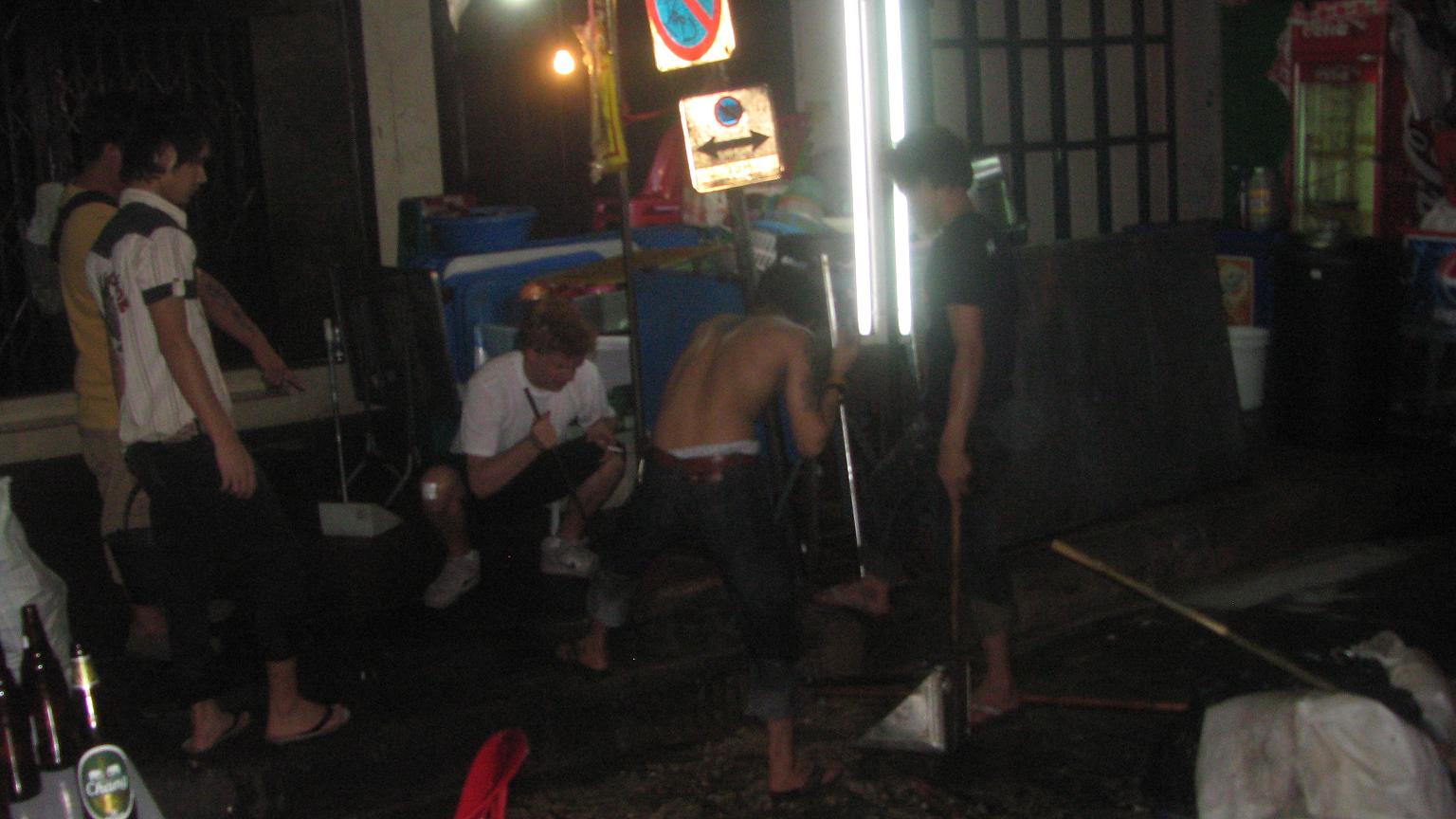 First off, giving away a 2 month, 15 day Eurail pass worth 700 or 900E, look for details this week. I had a sick summer, why not make yours next summer?

What does one do when they fly from Europe straight to Bangkok!??! You know the answer so I will not fill you in. Know this though, I would have gone to Chiang Mai tonight but I woke up at 4pm and still need to sort out my lack of electronics. I blame it on the “jet lag” not that I believe in that myth. Just an excuse for complainers to complain. I scoff at jet lag with a long scowl. I will say that immediately after finding a room, I got an amazing massage for ~$6US… May get another today.

I do like it here and even entertained thoughts of living in Bangkok while out on yesterday’s most egregious “black tie event” evening with my friends from the USA, the lady from the Netherlands I met at the airport and split a cab with as well as the German lady I met having a smoke in front of a hostel and invited to join us.

Later, the group split up and I ran into my friends from Paris that I met earlier in the evening and hit up “LE CLUB” aka the Blade “Blood Rave” like club, I love that club. Most hate it, obviously. Also ran into my favorite homeless guy but I doubt he is homeless, he just dances on the street for cash. I joined him doing hundreds of jumping jacks and jumping around like I was on a pogo stick, without the pogo or about to start a bboy battle by myself so naturally, it never started. Definitely helped his sales, if you can call it that.

One thing I find very cool is that all my regular hang outs remember me, they look at me for a few moments then say “hey, welcome back” or something to that extent but remark my hair is way longer and I need a shave.  After having a beautiful Swedish ballet dancer shave you, doing it yourself is even less attractive. Considering the volume of people coming through, it is cool to have some friends that live here / remember you. Kinda feels like going to a “home”. Notice people say “Home” why not have “homes”, I most often prefer the plural of anything… Add an S and stuff gets more fun.

Friends told me they have not seen my tuk tuk driver friend in ages, I was mortified. On the way here I ran into another one of the crew members, I believe he is my friends side kick, every action hero needs a side kick FYI. Turns out my buddy  is working tonight, awesome, would be a shame to come through without having several smokes and countless laughs with a gent we will forever call “Joe”, if that is his real name.

I got a room for 370 baht a night with A/C, not that I used it. It has a lock box though which is pretty important to this character. I have found some rooms as low as 150 baht and oddly enough, some dorms that are 500 baht, huh!? Why stay in a dorm for 10E+ when you can get your own room!? Basically not sure why I looked around, just went back to my old stomping grounds.

The reality is this, there is no way on gawd’s good earth a distinguished gentlemen can get work done in Bangkok, it is simply not possible. On that note, I can smell my own arm pit, probably should take that shower most do when they arrive from a 16 hour flight to one of the sweatiest cities in the world, yeah that is a good idea.

Ohhhhhhhhhh how I love those orange juices and plethora of affordable street food, we aren’t done yet, fyi. Last night eat some sick (In a good way not like makes you sick, well maybe it will, time will tell) food on the streets near where I cleaned the sewer in January with a staph infection. It was 5$ for 3 of us!!! Met a dude from Montreal who builds apartments and ships the cupboards etc from China. He said he picks up $20,000 of gear for $800. Porcelain or whatever it was, $0.45 a [email protected]#$ square foot.

On the plane, I crafted an 11 question survey to test a theory of mine that backpackers and most travelers DO NOT read travel blogs, on that note this is NOT a travel blog, notice there is a category called travel blog? Well, one is traveling so it is apropos. Either way, it also asks about a social network and digs into guide books to see why people carry them.

Being in Bangkok would be good as a sample of anything less than 1000 randoms is simply crass. It would also be interesting to meet 1000 more travelers. Remember you can see someone 1000000 times without noticing them and they can be in every city you are. If you do meet them, even in line at coffee, you will see them everywhere and probably become a friend because what is a friend? A friend is someone you have SOMETHING in common with, nothing less nothing more and then there are countless shades of gray or grey or goose!?

Tip of the hat and a click of the heels from Bangkok,

P.P.S: The flight was interesting but that story is for another day.