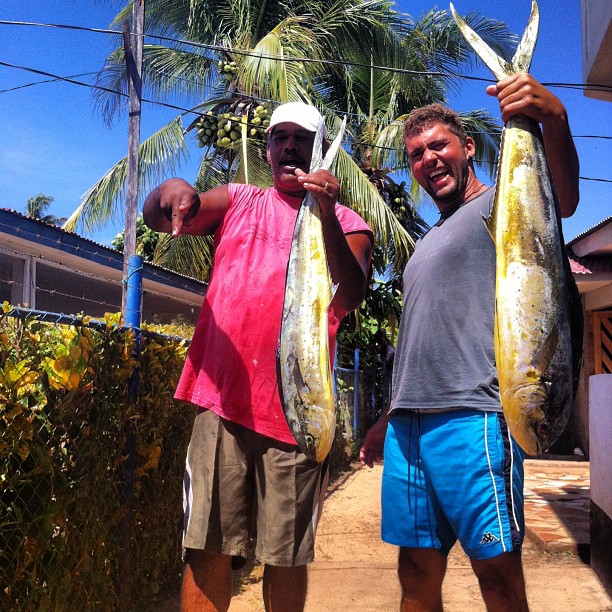 Consider this a public service announcement of sorts to fishermen far and wide, the Dorado are RUNNING off Little Corn Island. Last night I got invited to fish tacos at a friend’s house, they had pulled in 3 Dorado aka Dolphin Fish aka Mahi Mahi – “the fish so nice they named it twice”. This morning was much of the same, I’ve seen them here and caught some off the coast of Panama before this blog started but wow, the Dorado are running right at my doorstep…

I was supposed to be on the mission above but a late night took control of the wheel and when we arrived to the wharf, the boat had set sail. Hopefully I’ll get out in the next few days as well, this is one of the nicest fish you can catch or eat, a real treat in every sense of the word. The photo is of Captain Randy from 3 Brothers and some super stoked gent from the UK who is never going to forget today.

From what I’ve heard, May and June are the best time for fishing in and around this area. A gent I met on the seawall one session told me that he was here last year and it was a few snapper a night, during the winter months it’s maybe a nice bite, maybe. There is a quote I found recently and I’d like to share, it’s by Ernest Hemingway and it goes like this “Anyone Can be a Fisherman in May”.

Last time I checked, I’m an “anyone” so it’s time to try my luck…

P.S: Not sure how much they weighed but who cares when it’s cooking right now?

P.P.S: A fisherman’s life is the life for me.

4 thoughts on “Dorados Are Definitely Running Off Little Corn Island”