I knew I had to eat some cuy asado which is roasted guinea pig while in Peru. Why did I need to? Eating is one of the things you do when you visit Peru if you’re the daring type. Cuy is guinea pig in Spanish incase you were wondering.  I’ll be using both terms interchangeably throughout this fine dining review.

What is Cuy – Guinea Pig in Spanish

Cuy is guinea pig in Spanish.  Cuy is also a popular Peruvian dish consisting of cooked guinea pig. It’s popular in the Andes and Ecuador is another popular spot to try it. Among tourists cuy is popular above all else for the novelty factor of trying something new. We’ll get into the taste of guinea pig later but for most, it’s a one time thing.

The term cuy asado refers to roasted guinea pig. This is one of the more popular ways to prepare guinea pig meat. It’s easy, the guinea pig is skinned, split open with insides removed and thrown on the grill. We’ll get to the taste in a moment. Another popular method is fried guinea pig. It’s the same principle only greasier.

It’s worth mentioning that roasted meat is popular in many Central and South American countries. Roasted chicken is pollo asado. As a result, I’m not shocked that the guinea pig I was given was cuy asado. The only problem with asado which means roasted is that it’s dry and well, boring. 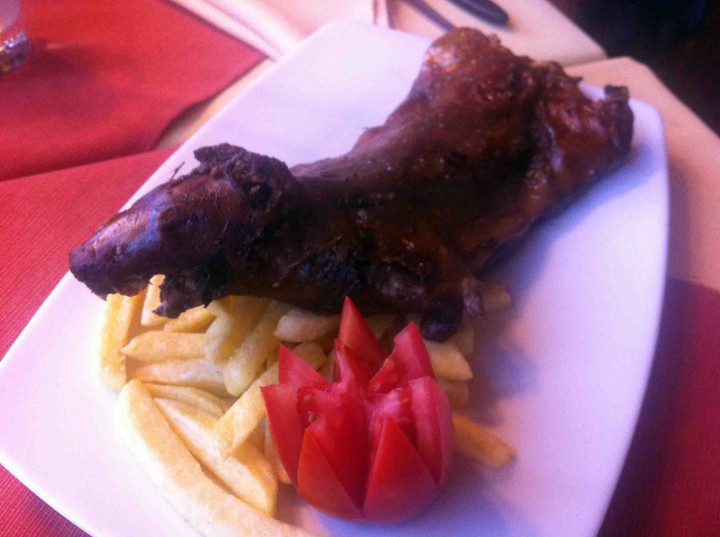 Guinea pig tastes like something you’ll try once. The cuy asado I had was really tough and over cooked. Also, there isn’t much meat on the guinea pig to start with. Something odd was that no spice was put on the cuy and no sauce was provided. As a result the taste of guinea pig is not something I was particularly fond of. Think of eating tough cardboard, now you’re getting an idea of what guinea pig tastes like.

Why do People Eat Guinea Pig?

Before we tackle why do people eat guinea pig, why not? In many parts of the world it’s the chickens, pigs and cows that are eaten. Having eaten all sorts of animals around the world, I can tell you that those three do taste the best. Most other animal meat tastes gamey, tough or just bizarre.

Why do people eat guinea pig? They eat it because it’s plentiful and available in the Andes. I don’t think many people genuinely love the meal pictured above but it’s available and affordable so why not? I’ve eaten rats before as well and they’re on par with my cuy experience discussed below.

I came across this spot whose name matters not near the Plaza de Armas and ordered some cuy asado. Moments later these fun South Koreans came in and one of the gents ordered the same. Eating guinea pig is an experience that I’d best classify as a one time deal. I’m glad I did it because if not I’d just be some vanilla traveler. If that ever happens, might as well just get hitched and start watching reality tv.

While discussing my experience eating roasted guinea pig, let’s focus on the fries. The fries weren’t much better than the guinea pig. I think if you’re ordering cuy asado, some coleslaw or anything with sauce would be a nice addition. The whole meal was depressingly dry.

A curried cuy would have been nice. Perhaps take it off the bones and mix it into something special. The tomato that came along was nice for presentation but didn’t serve much purpose beyond adding moisture to the meal. Cuy comes the way it does is for shock value, seeing it on the bones makes it more adventurous. When eating cuy like the one above, there is no mistaking it for eating cooked guinea pig.

If you’re in the area hit it up! Eating guinea pig in Cusco, Peru is an experience you’ll remember forever. Cuy asado basically tastes like chicken skin on top of bones when fresh. After 20 minutes or so it gets cold and you just want it out of your sight!

I have only a few hours left before my flight to Lima, off to the market to get sick on juice and soup.

P.P.S: Aware that wearing a hat is poor form but when looking homeless and eating leathery guinea pig, believe it to be alright.