I’ve recently returned from a trip to Stellenbosch, South Africa. There is lots more than just the wonderful wine and below are 25 interesting facts about Stellenbosch, South Africa. While there I enjoyed the wine routes and learning about the local culture as well as meeting lots of wonderful people from the area. I thought I’d do a little more research about this interesting place and share it with you. 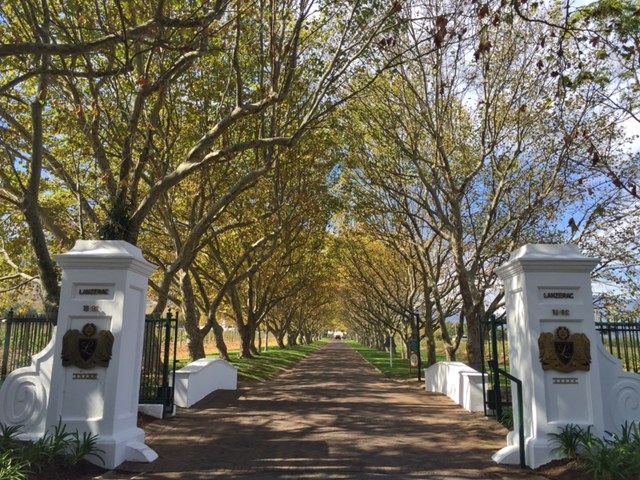 1) Stellenbosch was named after Simon van der Stel, a former governor of the Cape Colony and the founder of Stellenbosch. One thing you might not know about him is that he was the son of the Dutch governor of Mauritius. (source)

2)  Stellenbosch is known as the City of Oaks as a result of the planting of a large number of oak trees soon after it was established by founder Simon van der Stel. Their shade now lords over its streets and homes in the present day.

3) The area has been inhabited by humans dating all the way back to the Paleolithic era. In 1899, scientist Louis Péringuey found a set of tools dating back to the Early Stone Age on his daily walk.

4) Fleeing persecution in France, Huguenots (a sect of Calvinists) came to the Stellenbosch region in 1690. They soon put their knowledge of growing wine grapes to good use, taking advantage of fertile soil that helped to start the wine industry in South Africa.

5) While this town certainly had many things going for it from the very beginning, it wasn’t all smooth sailing. In 1710, a fire broke out that ended up razing virtually the entire settlement. Similar fires in 1803 and 1875 finally led to a change in roofing material away from thatch, greatly increasing the resilience of the town’s buildings.

6) Want to spend a lovely day in one of the best public spaces that Stellenbosch has to offer? Then bring a picnic lunch to Die Braak, or the Village Green. Home to public events such as concerts, and spontaneous gatherings when the weather is stellar, it is THE place to people watch and enjoy the brilliant South African sun.

7) When at Die Braak, take some time to look around the Church of St. Mary. One of the few thatched roof buildings left in town after previously mentioned fires led most to re-construct the town from more fire-resistant materials, it is one of the stand out architectural gems in town that make this place as charming as it is.

8) Despite the conflagrations that have ravaged it in the past, Stellenbosch is still filled with some serious history. Here, one can find the oldest house contained within a town or city in all of South Africa, the oldest inn in the form of the Oude Werf, and De Akker, its second oldest pub. 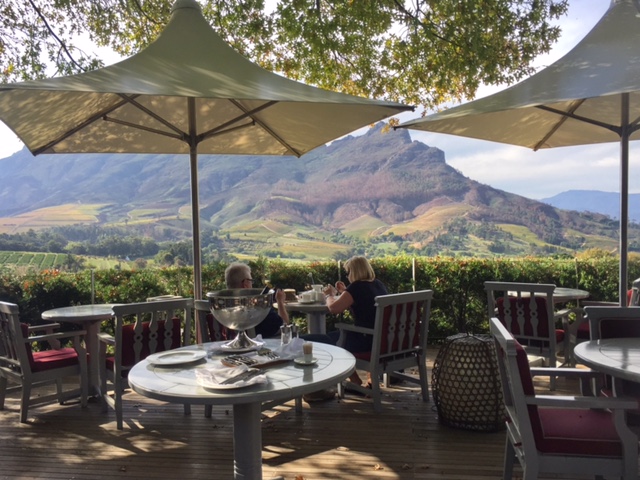 9) During the second Boer War,  Stellenbosch was home to a British military base that served to re-assign officers that were not getting the job done on the front line. This led to the coining of the embarrassing term “to be Stellenbosched”, which gained regular usage in that day for those demoted to a lesser role due to incompetence.

10) Boasting inspired mountain views and a student population of over 29,000 (4,000 of whom hail from 100 different countries around the world), Stellenbosch University ranks among the top 300 post-secondary institutions in the world.

11) Stellenbosch University is home to the Maties Rugby Club, which is one of the oldest (founded in 1875) and largest (over 1,300 registered players) in the world. It has produced legends such as Paul Roos, Danie Craven, and AF Markötter, so be sure to take in a match if you are a big sports fan.

12) The Stellenbosch wine route was founded in 1971, and with over 200 producers to visit in the region today, there is no shortage of fine tasting rooms, art galleries, and restaurants to enjoy on a vino safari.

13) Being home to fine wine grapes and one of South Africa’s leading universities has made this town the perfect location for the Stellenbosch Conservatoire. As this nation’s oldest centre for music education, those looking to take in a classical music performance will be treated to the genius of its up and coming violinists, pianists, singers, and more.

14) While there are many wine regions within South Africa, those wanting to sample the very best that this country has to offer will want to choose Stellenbosch, as it has won the most awards per capita than any other region.

15) Warwick Wine Estate leads the way in the superstition department, as lead winemakers Nic van Aarde and Mike Ratcliffe have made a point of tasting the latest vintages from their barrels once a year during a full moon using their symbolic Wedding Cup. The one year they didn’t do it was the only time that any of their products failed to get less than five stars (their Cabernet Franc only got 4.5 stars). This made this tradition an ironclad ritual that is faithfully executed each year.

16) While there are many food and wine festivals that can be found throughout the Western Cape, the Stellenbosch Wine Festival is among the oldest and most renowned, making it one of the best to attend in the region. 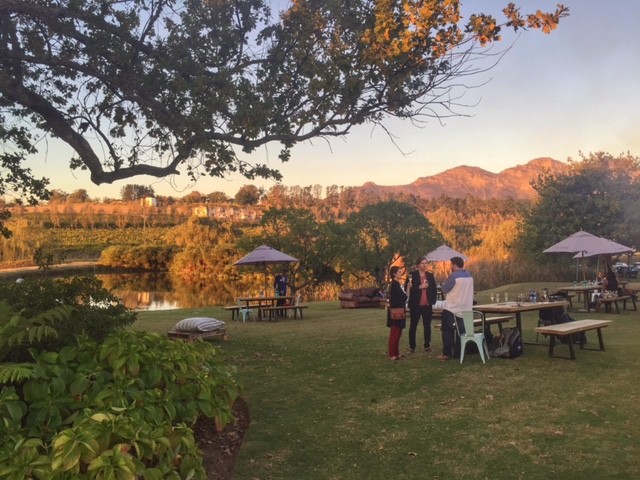 17) There isn’t just wine grapes being produced from the soil in the Stellenbosch area; there are plenty of farmers that produce organic, free-range foods here. Sold at several markets that go off at various times from Friday through Sunday, you’ll be able to sample food the way it was meant to be – grown and prepared by humans that care about a quality product over quantity.

18) Where wine and mountains are, the creatives will come. Many have made the 50 kilometre pilgrimage inland over the generations, and finding themselves unable to leave, have settled and opened galleries here. Recently, tourist authorities have developed an art route to compliment the long established wine route. Meandering through the downtown core, culture hounds will have their hands full during an entire day of creative exploration.

19) Stellenbosch is one of the best places in South Africa to take in Cape Dutch architecture. A unique style of building that combines Dutch, French, German and Indonesian design elements, it can be seen in many of the classic farmhouses located along the Stellenbosch Wine Route.

20) Those looking for the best collection of Dutch colonial architecture in Stellenbosch will find what they are looking for along Dorp Street. Originally part of the old road that connected this settlement with Cape Town, many of these structures have been recognized as national monuments.

21) The manors along Dorp Street aren’t the only historic attractions in Stellenbosch, as there are some of the aforementioned stately oak trees that line its streets have also been honored as national monuments. Look for plates declaring them along Dorp and The Avenue (that’s what it’s called!

22) Despite its old bones (or perhaps because of it), Stellenbosch is also home to a thriving tech startup culture. Fuelled by a steady supply of talent from Stellenbosch University, the creatively dubbed Silicon Valley of South Africa is presently home to dozens of bootstrapped companies. Mxit, one of South Africa’s leading social media networks, has made this city the first on the African continent to have free public wi-fi.

23) The Stellenbosch Golf Club is one of the most celebrated of its kind in South Africa. Ranking as the 4th oldest course in the country, it has played host to five South African Master’s tourneys and the 1999 South African Open. If you’re searching for a golf club that will put your skills to the test while constantly attempting to distract you with mesmerizing vistas, you’ll find it all here.

24) Active travelers aren’t left out of the mix either, as Stellenbosch is located close by to Jonkershoek Nature Reserve. Here, athletic folks can hike, mountain bike and ride horses through lush mountain terrain. Keep an eye out for baboons, honey badgers, and mongooses, as they are all native to this park.

25) Those seeking diversity during their Stellenbosch holiday will be able to experience it by booking a trip to the township of Kayamandi. Despite a closed off reputation that these settlements had garnered over the years, they are opening up to tourism, showing the community spirit and beauty that can only be witnessed from within. 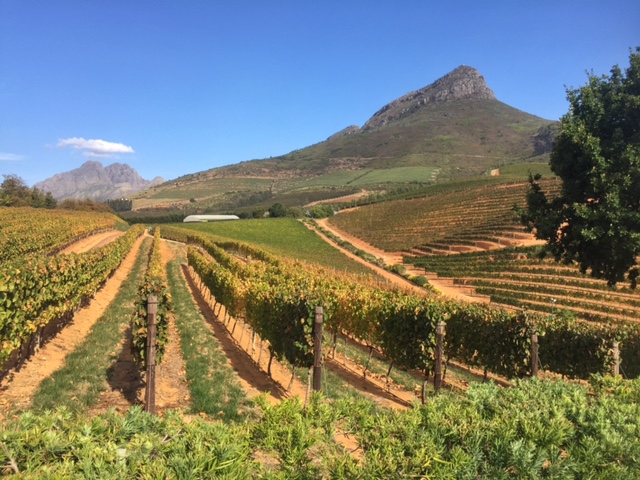 The list could go on but this should give you a better idea and interesting facts about Stellenbosch. It’s a unique place with lots to offer. I do know that when I return I’d love to play a round at Stellenbosch Golf Course, I love old courses for their charm and history. Also, I visited about a dozen wineries so lots of welcoming vineyards to explore, local dishes to try and wines to left to taste. Now that you know more about Stellenbosch, you just need to decided where to stay in South Africa and get your plane tickets.

We’ve done our best to research these facts, if you find anything that isn’t accurate or you’d like to mention some more, please let us know in the comments below!

In closing, I’d like to thank the fine people from iambassador, Destinate and all the other partners for making this Stellenbosch Experience campaign possible. Naturally, all opinions are my own as they always have been and always will be.